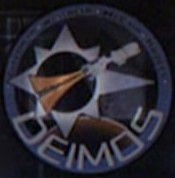 The Deimos Project was initiated by the Terran Alliance Parliament in 2103 with the goal to build the first faster-than-light (FTL) drive. It was concluded in 2109 with the successful return of the first JumpShip to reach a foreign star system.[2][3]

Starting in 2102 the Terran Alliance Parliament debated the creation of an FTL drive. Fourteen months later (November 2103), debate ended and the parliament authorized the immediate construction of FTL technology. This project was named the Deimos Project after the Martian moon where the project was based. The ultimate goal of the project was to investigate the Tau Ceti system.

Because of the huge cost associated with the project, many of the poorer nations of the Alliance strenuously objected to the project. At a cost of a trillion dollars, these nations felt that this money could be better spent on humanitarian relief. In 2105, Terran Alliance member countries on the poorer level clashed with the richer countries because of the feeling of being overtaxed but denied the material benefits of their taxes. There were massive riots in Central and South America. Despite this unrest, the project moved forward with dozens of the Alliance's best scientists and engineers working to create the prototype JumpShip.

Although called a "ship", the prototype was a 200 meter x 10 meter box surrounding a drive core with basic navigation instrumentation. Little more than a needle, there was no bridge, no cargo, not even a fusion engine. The vehicle had to be charged externally and towed into position by another ship.

The prototype JumpShip, carrying Raymond Bache just before the first manned jump, as seen in the intro video of BattleTech (VG) (apocryphal)[4]

On August 28, 2107 the prototype JumpShip was towed to a point 7 AU directly above the north pole (zenith) of Sol. It took 10 days to power the ship externally. On September 3, 2107 the research flagship Volga transmitted the jump signal to the prototype ship. Less than one minute later the prototype successfully rematerialized 7 AU from the south pole (nadir) of Sol.

Terran scientists and officials reported, "A little off target, but intact... Kearny and Fuchida should have lived to see the day." After this quote, the Deimos hyperdrive came to be known as the Kearny-Fuchida Drive.

The unprecedented success of the first hyperjump dramatically increased funding for the Deimos Project to achieve its ultimate goal. This again caused civil unrest in the poorer nations of the Alliance.

February 2108 marked the first successful human, Raymond Bache, to jump through hyperspace. He experienced dizziness and nausea but after further testing, Alliance officials deemed those side effects acceptable in the face of this remarkable technology.

The final stage of the Deimos Project was the completion of its goal, the manned exploration of Tau Ceti. On December 5, 2108, the TAS Pathfinder made its historic jump to Tau Ceti and returned to Earth 30 days later.

The success of the Deimos Project led to the colonization of space and to the BattleTech Universe.