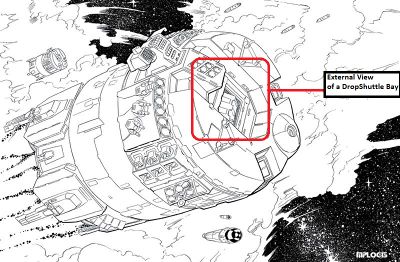 Invented approximately in 2110 by the Terran Alliance, the DropShuttle Bay was internal docking bay used for DropShuttles (forerunner of the DropShips) to JumpShips. When they were invented, the JumpShips had no way to convey large quantities of cargoes for colonists to a planet's surface. The DropShuttles were invented as well as the Bay to solve this problem. Bays were limited the size of the DropShuttle to 5,000 tons, only pair of them may be docked per bay. Another detractor in using these bays was that they were very time consuming to use.[1]

Space going ships that used these bays were Primitive Jumpships and early WarShips, such as early League-Class Large Destroyers and Defender-Class Battlecruisers.[2][3]

By the Twenty Fifth Century, Drop Collar and the K-F Boom would be invented, allowing for larger DropShuttles known as DropShips to dock externally to a JumpShip up to 100,000 tons. Thus due to economics, the bays would be dropped in favor of the more effective Drop Collar System with the K-F Boom.

DropShuttles Bays would be come extinct by 2500[1], while some examples of of them persisted till early Twenty-Eighth Century on ancient warships, such as Defender and the Cruiser.[4][5]

entire process—per DropShuttle is calculated differently. It takes 30 minutes, plus 1 minute per 200 tons of ship to launch a ship from a DropShuttle Bay.[1]