Elizabeth Hazen was the founding Khan of Clan Jade Falcon. She is one of four founders recognized by the Jade Falcons, and is the most well-regarded by her Clan. She is also believed to have been the first to tame a jade falcon, a genetically engineered mix of the peregrine and the gyrfalcon, designed to combat native pests of the Clan Homeworlds. Hazen's jade falcon was named Turkina, a name that became the basis for the elite Turkina Keshik of the Clan Jade Falcon Touman, while also defining much of the history and legend surrounding this Clan Founder.[2]

Hazen was not present the day the Usurper struck the Cameron line from continued existence. Visiting her brother Lionel in a hospital as he recovered from an aerospace fighter crash, the building came under attack by Amaris' troops. After all the able-bodied were herded from the building, forced to leave the sick and injured behind (including Lionel), the hospital was bombed before a stunned crowd of onlookers.[3]

During the final assault to retake Unity City, Hazen and the last survivors of the Royal Black Watch served as General Kerensky's bodyguards after Major Absalom Truscott's unit was badly damaged by the Amaris defenders. When the Imperial Palace gate was breached, Hazen was among several future Clan Khans who accompanied Kerensky as he was led to Amaris' private suite. Piloting her Highlander alongside General Aaron DeChavilier and Kerensky himself, Hazen confronted Amaris and raised her 'Mech's gun arm at him, but at Kerensky's order held her fire.[5][6][7]

Aleksandr Kerensky offered Elizabeth Hazen a role on his command staff, but she declined and tendered her resignation instead. She traveled Terra alone seeking healing from the emotional scars of the war. Her wandering took her to a monastery located in Hungary of Terra's Eurasian continent. There, over the course of a few years, she learned the ancient art of Falconry that would come to be central to her legend later during the Clan era.[8]

When Kerensky ordered the Exodus from the Inner Sphere in 2784, Elizabeth Hazen rejoined the SLDF, taking her open invitation to join the General's Command Staff, though some say at Aaron DeChavilier's personal request. This is one of the few times that Hazen's romantic life (or that of General DeChavilier) is hinted at, though it remains speculation how deep their relationship ran.[8]

During the long Exodus tempers flared all throughout the massive SLDF fleet, but tensions boiled over in one especially terrible incident: The Prinz Eugen Mutiny. In September of 2785, nine vessels led by the Texas-class battleship SLS Prinz Eugen decided to head back to the Inner Sphere. Major Hazen was appointed to bring the ships back into the fold and did so with ruthless efficiency. Included in her force of 160 marines was Andery Kerensky, on orders from General Kerensky himself to take part in the mission. Afterward, Major Hazen would stand at the head of the firing squad that executed the leaders of the mutiny, likewise accompanied by the younger Kerensky.[8][9][10] 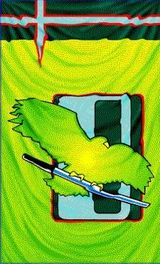 Pentagon Worlds and the Clans[edit]

The Jade Falcon species was bred on Eden in the early years of the Pentagon Worlds, to combat a winged predatory reptile that fed on livestock. Elizabeth Hazen, then the Dagda garrison commander, so when the species was imported there to perform a similar role, she obtained and tamed one of the first of these genetically engineered birds to hatch. A mix of the peregrine and gyrfalcon, she would name her jade falcon Turkina, in honor of the powerful wife of an ancient Mongol Khan's wife, keeping it for many years during the colony era.[11]

When the colonists on Eden rioted in 2801 due to colonial hardships as well as factional jealousies, it radiated social shock waves throughout the Pentagon Worlds. General Kerensky ordered General DeChavilier and Major Hazen to quell the rebellion.[12] To begin an event that became known as the DeChavilier Massacre, General DeChavilier was killed during an ambush set up by Liao insurgents on Eden who were fighting against a nearby enclave of Davion colonists. Much is said in various Clan histories and legends regarding this incident. But what is known is that after her own 'Mech was downed by the rebels, a numb and nearly-defeated Elizabeth Hazen eventually broke away from her paralyzing grief and rose up in a violent rage. She then used a katana as her primary weapon during a rampage that would see the distraught but galvanized Hazen mercilessly kill as many of the insurgents as she could find in revenge for her loved and beloved commander's death. She would go on to lead the survivors in taking the rebel stronghold, her force slaying every rebel that they encountered.[11][13]

Return to Eden and the Pentagon Worlds[edit]

On 2 July 2821, the long-awaited assault on the Pentagon Worlds — and Eden in particular — became a reality. Clan Jade Falcon was one of the four Clans selected for the Eden campaign, after the ilKhan held a small but fierce competition for that particular right.[15] Khan Elizabeth Hazen's tactical brilliance was as sharp or moreso than many other Clan leaders, despite being the oldest Khan in Operation Klondike at age 80.

During the course of the campaign she led her Clan through a string of victories against numerically superior forces. In action against the Sarbat Khanate, Khan Hazen's Falcons would clash with elements of Clan Hell's Horses, who had been ordered by the ilKhan to support the Jade Falcons' push during the early stages of the campaign. After one particularly nasty incident where Sarbat Khanate forces were able to take advantage of the two brawling Clans and inflict more casualties than usual, Khan Hazen would swear not to work with what she scornfully called an "amateur" force ever again.[16]

Khan Hazen and her Jade Falcons fought bravely and with great skill during the battle for Novy Moscva against the Levic Ascendancy, a proto-state that was regarded as being the premier power in the Pentagon Worlds. They would actively hold down the outlying industrial areas of the city while the Wolves harried the Ascendency Military Force (AMF) in the city's central areas,[17] a task that saw great cooperation between the two Clans, but with occasional incidents of the competition between them getting out of hand. One incident specifically happened between the infantry points of Star Captain Carl Icaza and MechWarriors of Star Captain Franklin Ward where disciplinary actions had to be implemented due to the Wolf MechWarriors literally overstepping the Jade Falcon infantry in order to roust enemy infantry positions that had been called for and designated as Icaza's targets. Five Wolf MechWarriors were whipped after agreement by Khan Hazen and Wolf saKhan Elise Fetladral.[18] But with small incidents like these, the rivalry that would grow through the ages between these two powerhouses was likely born on Eden.[19]

Dagda: Falcons on the Hunt[edit]

Khan Hazen's Falcons would be activated again, along with Clan Wolf, to finish the stalled Dagda campaign. Together, both Clans would take part in one of the most infamous battles of Operation Klondike: The Siege of the Black Brian. After personally leading the fight to clear out all of the hostiles lurking in the labyrinth of tunnels deep below the huge Castle Brian, Khan Hazen was greeted upon her return to the surface several weeks later by a gathering of all twenty Clans in celebration of their collective victory. Operation Klondike was a complete success; but in total truth, it would only be completely finished after several more months of sporadic fighting, signaling the final gasps of all organized resistance to the return of Kerensky's children.[20]

After Operation KLONDIKE, many Jade Falcon warriors were disappointed by Nicholas Kerensky's choice to bond his genetic heritage to Clan Wolf. They questioned his vision and some even suggested that the Jade Falcons leave the Clans. Khan Hazen let this situation build for nearly a year. When IlKhan Kerensky announced a visit to the Jade Falcons, she and saKhan Lisa Buhallin decided on drastic action. In what was to be known as The Culling, loyal Jade Falcon warriors acting on orders from the Khans swiftly eliminated all dissenters. The ringleaders were put to death, and less vocal supporters were beaten and exiled to colonies or otherwise severely punished. When Nicholas Kerensky arrived, the Clan may have been smaller than it was before, but the ones who remained were a much more unified and fanatical force.[21]

The Legend of Turkina perpetuates the story of this Khan through each generation of young warriors in her clan. Her lines in the Jade Falcon Remembrance[22] likewise speak of the reverence with which her memory is held.

Khan Elizabeth Hazen set a harsh example for her clan’s continuing ultraconservative leadership in the coming eras. Clan Jade Falcon warriors after her time brook no rebellion from their lower castes and historically react in violent fashion if pushed, as they did towards their rebellious colonists in the Kerensky Cluster during the Golden Century.[23]

Elizabeth Hazen is noted to have piloted a Black Knight in battle at most engagements.[11] During the final battles on Terra, she employed a Highlander.[7]