Ellie Kinnison was the first Khan of Clan Steel Viper, later Abjured for treason. She is known to the Steel Vipers as the "First Khan" and to the rest of the Clans as the "Traitor Khan" or "Not-Named Khan".[3][2]

Deeply committed to her Clan and the ideas of Nicholas Kerensky, Ellie Kinnison's devotion was often described as militant by comparison to many of her peers. In battle, she was said to be something of a berserker, often acting without fear for life or limb. Over time, her intense passion for ilKhan Kerensky would lead to obsession and insanity, and ultimately, to her ignominious demise.[1][4]

Rise of the Viper Khan[edit]

Lieutenant Ellie Kinnison was a commander in the 131st BattleMech Division and a protégée of SLDF hero Antonius Zalman. When Nicholas Kerensky founded the Clans in 2807, he publicly endorsed Zalman to be elected as the first Khan of Clan Steel Viper; Zalman refused the honor and asked Kerensky to endorse Kinnison instead. Kinnison stated that she would only serve as Khan if Zalman accepted the position of saKhan and continue to serve as her mentor. Kinnison and Zalman were elected as the Viper leaders and proceeded to adapt their Warrior Caste troops to the ilKhan's new rank and file system. On January 16, 2809[5], saKhan Zalman was killed in a training accident and replaced by Star Colonel Steven Breen.[1][3][2] 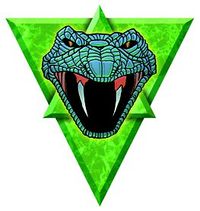 In 2821, the Clans moved to retake the Pentagon Worlds. Clan Steel Viper was part of the forces that were chosen to take the world of Arcadia. Though the initial days of the invasion were wracked with turmoil between Clan Star Adder and Clan Ghost Bear, Khan Kinnison and her Vipers worked closely with Clan Blood Spirit throughout the campaign. Each Clan complemented the other's fighting style, often leapfrogging to take targets as they appeared.[6]

Landing over 100 km south of their designated landing positions, Clans Steel Viper and Blood Spirit acted on intelligence gathered from forces retreating from the Star Adders' attacks to the north.[7] Though Khan Kinnison took issue with much of Khan Absalom Truscott's plans, Khan Colleen Schmitt of the Blood Spirits helped talk her into keeping at least to the outline. The two Clans raced each other from settlement to settlement, bidding for the honor of taking each one. This was encouraged by the actions of the Ilkasur Shogunate warriors, who would often pair off to fight separate duels. The targets that the Steel Vipers skipped were often mopped up by the Blood Spirits, as Kinnison concentrated on her blitzkrieg-style assaults to the exclusion of all else. Eventually, the two Clans were at the capital of the Shogunate, Kito. Viper saKhan Steven Breen would negotiate the final battle for the city, fighting well away from the industrial sections of the settlement. The two sides developed a great respect for one another, easing the transition to Clan dominion.[8][9]

Turning east after the fall of the Ilkasur Shogunate, the two Clans next set their sights on the Confederation of Arcadia. The Steel Vipers and the Blood Spirits would often bid for their targets, defeating the relatively large military force defending the region, with the loser of the bid acting as backup to the winner. In this way, the modern Clans' bidding system was worked out in the field during the months of fighting.[10]

As the two Clans moved further east, their next opponent was the Liaoist Democratic Republic of Rand. After losing their capital at Rivera, the Rand forces in the area massed and counterattacked the Clans. Blood Spirit Star Captain Devon Boques rallied troops from both Clans, and in a three day battle, ultimately repulsed their attackers in spite of superior numbers. The goodwill that existed between the Steel Vipers and Blood Spirits would evaporate after fighting their next target. The Davion-leaning Helgren County reportedly had the best trained forces on Arcadia, and proved it by defeating Clan Steel Viper in battle near their capital. The Blood Spirits backed up the Vipers and helped to win the day after working out a private one-on-one battle that saw the forces of Helgren County surrender to the Blood Spirits. Though both Clans raced to claim the resources up for grabs, the Blood Spirits would get the better of the deal through their having captured Tiberius Reed, the former Sheriff and leader of Helgren County. Khan Kinnison was angered by the turn of events, but could do nothing, especially after the ilKhan ruled in the Blood Spirits' favor.[11][12]

After this, the matter of defeating the Kingdom of Surev was a formality, as the small nation had imploded as the Clans drew nearer to its borders. With this anticlimactic fight, the campaign to take Arcadia came to a close.[13]

While the Vipers were adapting the people of their new Enclave to the Clan Way, they noticed their Khan was acting rather strangely, taking every opportunity to preach Kerensky's new society in a fervent manner. However, this method seemed to work, as the ilKhan paid a visit to Arcadia a few months later and noted that the Vipers managed to assimilate their portion of Arcadia's population most efficiently. In an attempt to win Kerensky's affection, Kinnison presented the ilKhan with a gift of a large captured steel viper, the Clan's namesake animal.[3]

Once the Vipers had settled into their new Enclave on Arcadia, they began their Warrior Caste eugenics program. A report soon reached the ilKhan that the Vipers were graduating fewer warriors than other Clans, so the ilKhan sent a Clan Sea Fox Scientist Caste investigative team to Arcadia to observe the Steel Viper methods of producing warriors. The Sea Fox scientists found nothing wrong; it turned out that the Vipers had a much tougher training regimen than other Clans, thereby producing fewer, but more elite warriors (a doctrine that is still practiced by the Vipers in the present). Along with the scientists' report to the ilKhan was an invitation from Khan Kinnison for the ilKhan to come and see the Viper training methods for himself; Kerensky accepted Kinnison's invitation and made plans for a vacation on Arcadia.[3]

As soon as Kinnison received the ilKhan's reply, she ordered that everything be made ready for the ilKhan's visit, placing saKhan Breen in charge of security. As Breen inspected a warehouse near the DropShip landing pads where Kinnison would welcome the ilKhan, Breen was attacked by three masked men whom Breen quickly disabled, suffering a broken arm in the process. Breen sounded the alarm and searched the rest of the warehouse, finding and eliminating two more assassins. When a message came in over the two-way radio carried by one of the assassins, Breen ran to the ilKhan's DropShip site, finding that the VIP DropShip had already landed and the ilKhan and his wife, Jennifer Winson, were disembarking and about to meet with Khan Kinnison. Breen drew his laser pistol and fired...[3]

...only to hit Khan Kinnison's shoulder, causing her to stumble and fall. As Kerensky's bodyguards rushed the ilKhan and his wife back up the DropShip's egress ramp, three Viper warriors attempted to subdue Breen. In the confusion and chaos, only Breen and Winson saw Khan Kinnison draw out her own pistol and aim it straight at Winson. Breen managed to fight off the Viper warriors attacking him and fired his own laser pistol at Kinnison, killing her.[3]

Breen was eventually exonerated of any wrongdoing, as the surviving assassins in the warehouse confessed to be working for Kinnison, whose personal journals revealed her mental instabilities, including her insane ploy to kill Jennifer Winson and cause a grieving Nicholas Kerensky to turn to Kinnison for love and support. In gratitude, Kerensky publicly praised Breen and nominated him to be Clan Steel Viper's next Khan:[3]

"It seems inconceivable that everything we have accomplished can be threatened by the actions of individuals within our highest ranks. Khan Kinnison acted against everything the Clans represent and all we strive to achieve. ...It is just such aberrations that Clan society will prevent and control. Fortunately, the Steel Viper ranks also produced an individual capable of seeing and believing in the evil harbored in another's heart, and who acted selflessly to dispense proper justice to such a traitor. Count yourselves fortunate, Steel Vipers, that your Clan survives by virtue of a pure majority. ...I nominate Star Colonel Steven Breen as Khan of Clan Steel Viper. ...As your ilKhan, I claim the right to strike the name Kinnison forever from all records past and present. The tainted genes of that accursed line shall be cast out and destroyed as well."[3]

Thus was born the Clan Trial of Abjuration, in which an individual, unit or even an entire Clan will be disowned by the rest of the Clans. However, Kinnison is still remembered by the Steel Vipers to this day:

From the ranks of the many she rose,
Pre-eminent among all others.
Foe after foe fell before the young warrior
For destiny guided her sword.
When our Leader called, she rose
And became the head of the mighty Serpent.
She guided the Viper alongside the Wolf,
Along the path of the True Vision.
Let us forever honor the First Khan, who showed the way.
Let us remain faithful to the True Path she marked for the Viper.

Due to Ellie Kinnison's penchant for wading into the thick of battle, if she begins a turn within 5 hexes of 2 or more enemies, all forces under her command suffer a -2 modifier to initiative as they will tend to stay close to their leader. This is offset by a +1 to-hit modifier gained for the same circumstances.[4]