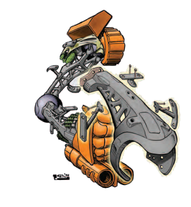 Developed by the Terran Hegemony as a prototype in 2471 and as a refined production version in 2487, endo steel was designed especially for use in BattleMech skeletons. Using zero-G manufacturing techniques that uniformly mix high-density steel with lower-density titanium and aluminum. Rhenium is also used in this process. The process produces a metal twice as strong per unit of weight as standard skeleton materials thus halving the weight of the chassis, but at an increase in overall bulk (Inner Sphere endo steel takes up 14 critical slots, 7 for Clan, and prototype endo steel takes up 16).[1][2][3][4][5][6]

The orbital facilities that produced these weight-saving chassis were prime targets during the First Succession War, rendering the technology extinct in the Inner Sphere outside of the halls of ComStar by the Second Succession War. Thanks to the Helm Memory Core and examples from the advanced 'Mechs ComStar provided as part of Operation Rosebud, the Draconis Combine regained the ability to produce endo steel by 3035 with the other Successor States quickly following suit. The Clans however never lost the technology and eventually refined it, halving its bulk compared to Star League era endo steel.[1]

While the weight savings for endo steel are greater than those saved by ferro-fibrous armor, its use is hampered by the extremely low number of orbital factories in existence, significantly driving up costs due to low availability. Further, as it makes up the skeleton of a 'Mech, adding it to existing 'Mechs generally requires lengthy factory level refits, and in general makes field repair more difficult than standard skeletons.