This article is about the interstellar route. For the novel, see Exodus Road (novel).

The Exodus Road was the route established between the Clan Homeworlds and the Inner Sphere during Operation REVIVAL. At roughly 1,000 light years in length, it was a secret way through the stars leading more or less directly to the coreward border of the Inner Sphere and Periphery. Despite the name, this path is different to the meandering and far longer route originally taken by General Aleksandr Kerensky for Operation EXODUS.[1]

Nobody exactly knew the coordinates of the Exodus Road itself, the information was on purpose left secret to nearly everybody to avoid it being discovered by the Inner Sphere states.[2]

The first ones to travel from Clan Homeworlds to the Inner Sphere were Wolf's Dragoons at the beginning of their reconnaissance mission. Later, the first ship to make the way after the Exodus Fleet was the ComStar exploration vessel Outbound Light, which appearance at Huntress in 3048 triggered Operation REVIVAL.

After the Clan Invasion, the Exodus Road became a key supply line between the invader Clans and the Clan Homeworlds. To prevent the Inner Sphere forces discovering the road, the road was divided into several stages. Any ship that traveled the route had to erase its navigational data before the next part of the journey as a security measure.

The Clans established HPG stations between the end points to maintain direct communication. These stations also were responsible of unloading the parts of the Road to the ships who did the travel. The only one of these stations known was Pivot.

The Explorer Corps of ComStar searched hard the Clan Homeworlds, launching at least an attack against Pivot station, who was defeated.

At the end, the Exodus Road was given to ComStar by the old Smoke Jaguar warrior Trent, making possible the launch of Task Force Serpent the Smoke Jaguars annihilation, and the establishment of an SLDF post on Huntress.

After the Wars of Reaving the Home Clans destroyed all the stations of the Road, isolating themselves from the Inner Sphere. After that, the Exodus Road was abandoned. 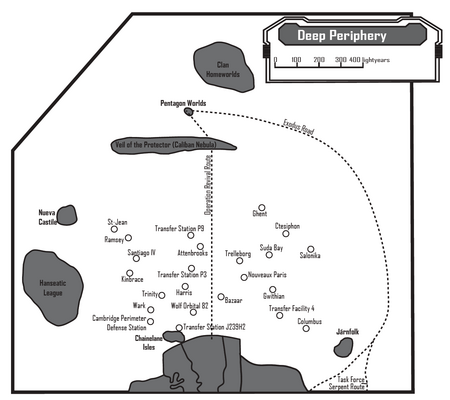 No full route between the Inner Sphere and the Clan homeworlds has ever been made public but certain systems along the route(s) can be identified.

The original journey from the Inner Sphere to the Pentagon Worlds

The journey from the Pentagon Worlds to the Kerensky Cluster.

A "Reverse Exodus" away from Clan space.