Operation BROKEN BLADE, commonly known as the First Battle of Hesperus II, was a major assault launched by the Draconis Combine in 2787. 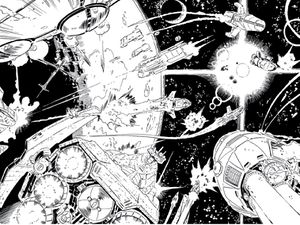 The Lyran and Draconis fleets in the space battle in Hesperus II's orbit.

After the battle of Skondia, the Draconis Combine redeployed the fleet to Hesperus II, repairing the vessels and reinforcing it with several warships. The Draconis fleet consisted of over 20 WarShips escorting a ground invasion force of 4 Mech regiments and supporting assets. It did not expect significant spaceborne opposition at Hesperus II, and were surprised to face a Lyran fleet of approximately 100 combat vessels, including 30 WarShips.[1]

Operation BROKEN BLADE's objective was to hamper the Lyran Commonwealth's ability to manufacture war matériel by destroying as much of the production facilities on Hesperus II as possible. Though the Combine WarShips managed to destroy some orbiting factories they were unable to support the ground assault because of the strong Lyran defense fleet. But since the attackers plan presupposed orbital support, the ground attack failed to overcome the defenders.

A key point of the ground battle happened when a group of two Kurita BattleMechs made his way through the lyran lines during a orbital bombardment. Their mission was to destroy an aboveground vehicle factory. Facing them were only two lyran MechWarriors, with a intact 'Mech another crippled. At the cost of one lyran life, and the death of several factory workers who joined the defense, they managed to defeat and capture both kurita pilots, saving the factory.[2]

The DCMS withdrew in January of 2788, having suffered more casualties than they had dealt.[3] In nearly a month of brutal space combat, the Draconis had lost over half of the fleet while their ground assault forces had been reduced to less than two regiments.[4]