An older technology still encountered occasionally, particularly in the Periphery, fission engines use nuclear fission by splitting heavy atoms for energy. Most often, the goal is thermal energy used to drive either a gas or steam turbine to generate electrical power which is then harnessed for various ends. 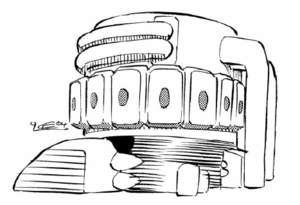 The use of nuclear fission for propulsive power was an early goal of nuclear research, one attained by the predecessors of the Western Alliance in under two decades from the end of World War II. At first limited primarily to large maritime applications (particularly submarines) and initially used by military vessels for reasons of cost, the idea of using fission engines for smaller-scale work was an enduring one that blossomed as technology advanced. Despite the drawbacks (primarily safety and the sheer weight of the engines themselves), fission engines are not an uncommon choice for powering IndustrialMechs and support vehicles.[1] Military use is much rarer, particularly on smaller units like BattleMechs or combat vehicles, and was pioneered by the Taurian Concordat in 2882.[2]

Fission engines have certain distinct advantages. They are very fuel efficient, providing ground vehicles with a functionally unlimited range defined more by a time measured in months to years, and the efficiency is such that the rules do not track fission engine fuel use for such units.[3] Fission engines are a high power energy source, meaning that units using them do not need power amplifiers for certain energy-intensive applications and are even able to use heavy Gauss rifles. Finally, fission engines require a somewhat simpler, less advanced industrial base to build and maintain than even the simplest fusion engines do, although the details of this point are obscured by the broad classification by Technology Rating.

However, fission engines are not without their drawbacks. A caveat to their fuel efficiency is seen in aerospace operations, where the fission reactor's own fuel duration is unaffected, providing a considerable endurance of power, but propellant use is much less efficient. Fission engines use radioactive fuels by definition, making a damaged engine a danger to the unit's operator(s) and requiring heavy radiation shielding for normal safe operation that makes them one of the heaviest engine types, even compared to internal combustion engines.[1] The size of fission engines frequently makes them more costly than an equivalent but safer and lighter fusion engine. Safety concerns also make them a controlled item.[4]

Many entries on this list represent best guesses based on support vehicle entries, which do not always note manufacturing location or engine brands and models. Customarily, the name and, if known, world of the vehicle's manufacturing company is used in these cases and marked with a question mark.

Fission engines are manufactured on the following planets: