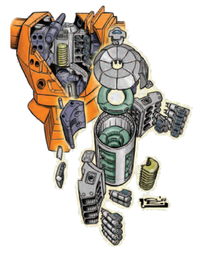 A fusion engine of a BattleMech

Fusion Engines are the most common type of BattleMech and aerospace power plant in the BattleTech Universe. Fusion engines can supply great quantities of power, enough to power massive vehicles and all of their weapon systems, including directed energy weapons common on the modern battlefield. Yet when no thrust is generated, fusion engines are so efficient, they practically never need refueling. If properly ventilated, controlled fusion reactions generate little heat. There are several sub-types of fusion engines available as well, each trading bulk for mass of the components.

Fusion engines are able to generate a great deal of heat. Simply moving the vehicle creates heat, though this is often a small amount. Though heat can negatively affect the vehicle's pilot or even the vehicle itself, a well-ventilated fusion engine is far less dangerous than the bleed-heat generated by charging and/or firing weapons, especially lasers and particle weapons.

In a BattleMech, the fusion engine resides in the center torso. It cannot be relocated elsewhere in the BattleMech, though certain types of engines may intrude into adjacent spaces within the structure.

Fusion engines, like other engines, are defined by their "engine rating". For 'Mechs, the engine rating is the mathematical product of the mass of the vehicle and its desired maximum walking or cruising velocity. Stated another way, a 'Mech's maximum walking momentum is directly proportional to engine rating. For instance,
A 30-ton Spider BattleMech with a 240 Pitban Fusion Engine is able to generate the same maximum momentum of a 60-ton Merlin with the same engine, but because the Merlin masses twice the Spider, the Spider's maximum velocity is twice that of the Merlin.[2][3]

Fusion engines usually will only shut down if damaged or if heat is uncontrolled. Unlike popular belief, there is absolutely no risk of a fusion engine accidentally becoming a nuclear weapon. [17] There have been a number of cases of fusion engines being "over revved" and exploding with devastating force, but this is more akin to a boiler explosion than a true nuclear explosion. More often a destroyed engine will be punctured by weapons fire. Because the plasma is held in a vacuum chamber (to isolate the superheated plasma from the cold walls of the reactor; contact with the walls would super-chill the plasma below fusion temperatures), a punctured reactor can suck in air where the air is superheated. Normal thermal expansion of the air causes the air to burst out in a brilliant lightshow often mistaken for a "nuclear explosion". This thermal expansion damages anything within 90 meters of the destroyed 'Mech.

Such dramatic failures are rare, though. It is difficult to sustain the fusion reaction and very easy to shut down. Safety systems or damage to containment coils will almost always shut down the engine before such an explosion occurs. The massive shielding of the engine (in the case of standard fusion engines, this is a tungsten carbide shell that accounts for over 2/3 of the weight of the engine) usually buys the safety systems the milliseconds needed to shutdown the engine when severe damage is inflicted.

Fusion technology was achieved by the Western Alliance in 2021.[18] Almost a century later, fusion technology had progressed to the point of using protium, the most abundant isotope of hydrogen.[1]

Fusion Engines are produced under the following brand names:

Fusion Engine is manufactured on the following planets: