Gerhardt Hansen was the commanding officer of the Hansen's Roughriders during their inception as a mercenary unit in the first half of the 31st century.

He was the grandson of Ludwig Hansen, who had led the regiment that would become the Roughriders in their escape from (unwarranted) purges from House Davion into the Free Worlds League in 2961 where they merged into the 12th Atrean Dragoons regiment which was commanded by their distant relative and Gerhardt's namesake, Major-General Gerhardt Hansen.[1][2]

Inseparable from his mercenary unit who quickly became media darlings, Gerhardt Hansen was described as a "direct"[3] and somewhat rowdy character, yet apparently a capable officer and leader.

In 3014 the 12th Atrean Dragoons under Colonel Francis Ferdinand sided with Duke Anton Marik in his revolt against his brother.[4]

Despite being slightly understrength, the Twelfth fought with great skill and success in the civil war, but in the ill-fated Operation Condor they suffered great losses on Calloway VI. Surrounded and decimated, the remnants of the 12th Atrean Dragoons surrendered to loyalist forces in November 3014.[5]

Although Ferdinand commanded the rebellious 12th Atrean Dragoons up until the battle of Matheran,[6] Gerhard Hansen, an influential House Marik officer at the time, was named as the man who led the unit in the uprising.[7][8] Context suggests Hansen probably assumed command sometime during the fighting on Matheran. 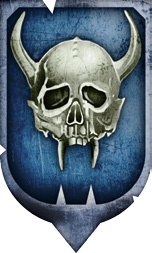 In any case, Gerhardt Hansen was in command when the remnant of the 12th Atrean Dragoons, together with other disenchanted Marik forces, turned their back on the Free Worlds League after the failed rebellion and went into exile, re-forming as the mercenary regiment Hansen's Roughriders under his command following one final battle on Ilion V, which at the time was a deserted planet in Lyran Commonwealth space just beyond the contested Lyran/Free Worlds League border.[9] (It remains unclear if they fought Marik or Steiner forces on Ilion V, or possibly among themselves.)

In 3018, their first contract brought them into service with House Steiner's Lyran Commonwealth proper. It is unclear what the unit had been doing in the two or three intervening years, though the Roughriders' somewhat famous assault on the Marik academy world of New Olympia may have occurred in this time frame before they went to work for House Steiner as mercenaries.

Stationed on Suk II, Hansen's Roughriders—under Gerhardt Hansen's able leadership—quickly gained renown and media attention as the archetype of the rowdy but successful mercenary. In 3019 they became one of the very few units to ever beat the famed Wolf's Dragoons on the battlefield during the hard-fought defense of Hesperus II in the 13th battle of Hesperus II. Later on they participated in numerous successful campaigns and during the Fourth Succession War were noted for both competence and fairness in their conquest of several Draconis Combine worlds including Wheel, Hainfeld and Satalice.

The unit as a whole made peace with House Davion after the Fourth Succession War, and under a deal sponsored by Katrina Steiner were loaned to House Davion for a well-paid, easy plum posting to garrison Bromhead.[10]

Gerhardt Hansen initially aimed to retire after the War of 3039 and hand over command of the unit to his son, Wolfgang Hansen, who had been groomed as his designated successor since coming of age. However, during the War of 3039 the Roughriders suffered heavy casualties on Pike IV and Wolfgang's performance in the defense of the city of Mercator in particular was rated poorly. As a consequence, Gerhardt Hansen pushed back his retirement until 3044 while Wolfgang underwent rigorous extra training.[2][11] In 3044, Gerhardt entrusted Hansen's Roughriders to Wolfgang and retired.

As of ca. 3039, Colonel Gerhardt Hansen and his son, Major Wolfgang Hansen, were noted for piloting the two CP-10-Z Cyclops 'Mechs with functional Tacticon B-2000 Battle Computers that the unit possessed.[11]