Duke Gideon Braver Vandenburg, heir to a ducal line on Ander's Moon, was the commander of the Blazing Aces mercenary unit. Framed for patricide, he found evidence linking rival House McBrin to the killings and after an odyssey of nearly five years avenged his family's death. He fell, along with the Blazing Aces, in battle against Clan Ghost Bear forces on Kaesong.[3]

He was married to a former MI6 agent, Tasha, and had a daughter named Maria Vandenburg.[3]

The character as mentioned in Recognition Guide: ilClan, vol. 11 is a nod to the main character from the (apocryphal) 1989 MechWarrior computer game.

According to the game, Gideon Braver Vandenburg, born on 8 April 3006, was the son of Duke Cameron Vandenburg of Ander's Moon. On March 1, 3024, he left Castle Vandenburg, his father's stronghold, for an inspection of the family's holdings. Upon his return two days later he found that a lance of BattleMechs had attacked the Castle, killed his family and stolen the Chalice of Herne along with other treasure. Evidence planted by Jarris McBrin, a rival who coveted the title of Duke for himself, suggested that House Vandenburg had worked with and then double-crossed the pirates. The Council of Representatives was unconvinced, however, and chose to delay the election of a new Duke until Gideon Braver Vandenburg had reached adulthood (23 years of age) on April 8, 3029. 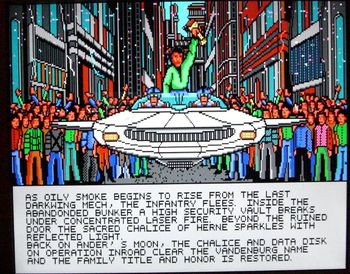 Facing false charges of treason, Gideon was forced to flee off-world. He formed the Blazing Aces mercenary unit, altered his name by abbreviating it go "Gideon Braver", and began his crusade to clear his name, find the Chalice, and regain Ander's Moon. Within less than five years, the evidence uncovered by the Blazing Aces revealed Operation INROAD, cleared the Vandenburg family name and restored their honor. Despite this success, it remains unclear whether Gideon Braver Vandenburg actually took the vacant office of Duke of Ander's Moon.

According to a subsequent computer game, The Crescent Hawks' Revenge, the Blazing Aces were destroyed in December of 3051, fighting forces from Clan Smoke Jaguar (or possibly misidentified Clan Ghost Bear forces) on Kaesong. Just before a Kell Hounds relief force (the Crescent Hawks) arrived, Gideon Braver suffered mortal wounds while piloting a Phoenix Hawk in single combat against four Griffins and a Phoenix Hawk, all heavily modified with advanced Clan technology.

His dying words to Jason Youngblood were: "You're too late. The Aces... destroyed. I've taken precautions, hidden the 'Mechs. Tell Maria... rebuild the Aces. She'll know what to do."

Morgan Kell later promised to Jason Youngblood that he would inform Maria Vandenburg of her father's cryptic last words.