For the Clan OmniMech that was designated the Gladiator by the Inner Sphere, please see Executioner.

The first homegrown BattleMech produced by the Draconis Combine was the Gladiator. The 55-ton 'Mech took seven years to design, as Coordinator Kozo Von Rohrs refused to open up the process to anybody but a select group at New Samarkand Armor Works (the predecessor of Luthien Armor Works) who were under constant surveillance by DEST. 2468 finally saw the GLD-1R Gladiator hit mass-production.[5] Following the Battle of Nox in 2475, the dishonored 'Mech was retired from official production, with NSAW closing down the production lines by 2488.[3]

Merryweather Industries was the first private company to attempt BattleMech production without governmental support. Despite their location in the Terran Hegemony, they acquired the plans to the Gladiator and produced a new run in 2490. They were unable to raise the capital to finish their second run, the 4R, and nearly went bankrupt before moving into IndustrialMechs. The GLD-4R production lines were closed down in 2495.[3]

A few salvaged Gladiator -1Rs were still in service with militaries across the Inner Sphere and Periphery, though these relics were finally pushed to extinction during the Reunification War. [5]

The 55-ton Gladiator has a top speed of 86 km/h, comparable to many other 'Mechs of the same weight. Nine and a half tons of armor provides a respectable amount of protection. Five jump jets enables the 'Mech to jump up to 150 meters at a time.[3] 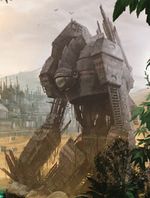 The GLD-1R Gladiator variant is subject to the following Design Quirks:[5]

The Gladiator (specifically the GLD-3R variant) was featured in Issue 0201 of BattleTechnology. In the article by Dale A. Kemper, additional details are described regarding Merryweather Industries' ill-fated production run of the GLD-3R Gladiator.

Originally intended to meet a Star League Defense Force requirement for a new long-range support 'Mech, Merryweather Industries offered the GLD-3R Gladiator, with the first prototypes undergoing testing in 2468. After achieving success in its early field tests, Merryweather Industries was awarded a contract to produce twelve hundred of the 'Mechs. However, in 2470 the contract was revoked, pointing to computer simulations that showed the 'Mech was not powerful enough to fill the role it had been built for. Having already produced over a hundred of the machines, and prepared to produce two thousand more, the loss of the contract nearly bankrupted Merryweather Industries. Private investors were quickly sought, and with the approval of the Star League, two thousand Gladiators were sold, most notably to the Lyran Commonwealth and the Draconis Combine. Following the conclusion of the first run, Merryweather Industries discontinued the Gladiator line and continued to produce IndustrialMechs. The long-range close-support role would eventually be filled by the Archer, specifically the ARC-2C variant. At the time of the article's printing (February 3028), the author estimates that about one hundred and fifty of the 'Mechs remain, though most are hybrids. There are no known examples of "standard" Gladiators as they were built. [18]

As presented in BattleTechnology, the GLD-3R Gladiator mounts a pair of DLC-10 shoulder-mounted LRM-10 launchers, backed up by a single Duodyne Mark II Medium Laser in each arm. A Fujika Multiband communication system and General Systems AV-12 targeting package is used. The GLD-3R is mentioned as using GE-2200 jumpjets, which are noted as allowing for altitude variation during during movement. The top speed and cruising speed is listed as 58.1 km/h and 84.2 km/h, slower than what its engine should theoretically provide. Compared to the GLD-3R presented in later sources, the one described in BattleTechnology has one fewer jump jet and mounts an extra half-ton of armor.[18]