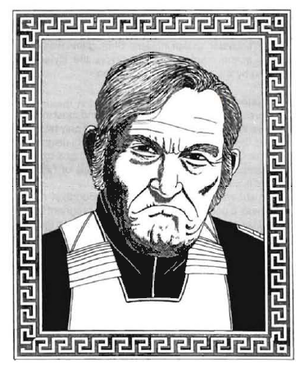 Samsonov was a handsome tall man, despite signs of age from wrinkles and a sagging jowl. He has known to have very good sense of judgment of individual.

Born and raised from a poor family on world of Tinaca. While attending school, he used his judgement abilities to discover local ISF placed there. He utilized the spy's resources enable him to set him on career to become a MechWarrior without him knowing.

While attending Wisdom of the Dragon, he learned reasonable leadership skills, but was also able to develop excellent administrative skills. After graduating from military school, entered the DCMS and its political realms. He used his administrative skills within the military bureaucracy to keep whatever military command he was with well supplied, unlike many Combine units at the time. He earned the enmity of other officers for outperforming higher-ranking officers and officials.

He eventually ascended to become commanding officer of the 19th Galedon Regulars. While in command, his unit conducted a successful series of raids against border worlds into the Federated Commonwealth during the later years of the Third Succession War, targeting Elidere, McGehee, Errai, and Kesai IV, and though his unit did not always won, it usually did better than any other DCMS regiments in the area.[2]

As Warlord of Galedon Military District[edit]

Coordinator Takashi Kurita in 3018, asked Samsonov to become new Warlord of the Galedon Military District. He accepted, enter realm of true politics, gaining wealth and prestige. However, in course of his military reign, he became petty.

During Galtor III campaign, it was discovered that Samsonov was blackmailing mercenary companies within his district, which caused significant problems during fighting on planet. His actions, caused fellow Warlord Yoriyoshi's troops go through hardships as their mercenary support loaded up with supplies prior to they did. [3]

By 3025 there had been many scandals in the Hachiman government, some of which pointed to Warlord Samsonov, and ISF sent several agents there to infiltrate the planetary government.[4]

His manipulations against Wolf's Dragoons when they where under DCMS ended in failure and with the lost of several DCMS units during the Battle of Misery and the actions during the Fourth Succession War.[5]

He was eventually killed in 3030 by Michi Noketsuna (under the guise of the Bounty Hunter) after being declared rogue by Takashi Kurita for his actions against Wolf's Dragoons.[6]