Gulkana is probably best known for the rise of Thomas Yarborough in the early 3020's. Then a member of the planet's militia, Captain Yarborough overthrew the civilian government and declared himself ruler. The noble families on the world didn't oppose Yarborough as he promised to honor their positions. Though initially the Captain's rise to power was seen as a good thing, opinion quickly turned against him when he declared the "Competency Laws". These regulations called for every citizen of Gulkana to receive an IQ test and be assigned a job appropriate to their IQ. People who scored high on the test were given important jobs while those who scored low were destined for manual labor.

Unfortunately the Competency Laws were a complete sham. Biased against the majority of the planet's population and wildly inaccurate, the results were enforced by Yarborough's well-armed followers. The effect of these test results were immediate and dramatic: The entire world, including Yeffters Weapons, came to a standstill.

Hanse Davion became aware of the situation when Yeffters stopped production. Though unable to directly interfere with the planet's government, the prince put pressure on the world's duke to evict Yarborough. In addition several lesser nobles were interested in fighting Yarborough's troops with their own retainers, but the duke's inaction prevented that. A grassroots campaign to remove Yarborough.[31] blossomed into a growing armed rebellion. The situation finally came to a head when Christine Salos assumed the Duchy of Gulkana from her father in 3033 and requested the Armed Forces of the Federated Suns step in. Even with this outside assistance it would be many years before the planet stabilized and order was restored.[32]

Gulkana has a single continent, Pangaea, and the majority of Gulkana's surface is barren, rocky, and devoid of native life due to its harsh, arid climate. The only indigenous plants and animals are concentrated around the equator, which is covered in lush jungle.[33] 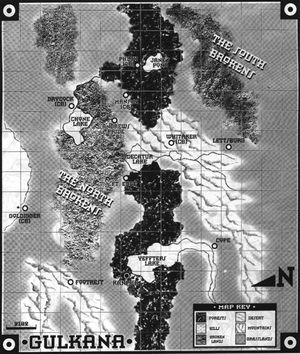