Born in 2991 in the city of Scandislum on Rasalhague, capital of the Rasalhague Military District of the Draconis Combine.

As a young man, he opposed the repressive ways of the Combine towards his fellow people, whom share Scandinavian blood. He first would join a non-violent movement to fight for his people's rights. After a time, of being violently repressed by the government he joined the militant resistance movement known as the Scandinavian People's Army or SPA. However, he was captured on his first mission and spent several years in a Kuritan prison. 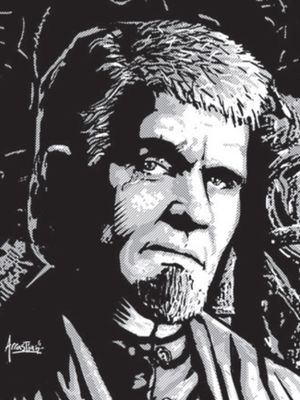 Resistance and formation of the Republic[edit]

When he was freed, he returned to SPA. He later joined another another militant organization known as the Tyr. He excelled in the group, and became its leader, gaining the nickname "Silver Fox of Alshain".

After the Fourth Succession War, he was approached by both Draconis Combine and ComStar representatives. They proposed to him their plans to create the Free Rasalhague Republic from the Rasalhague Military District. At first he feared this could be one of so many traps he faced in the past, but they won him over. In 3034 he declared himself Prince of the newly formed Republic. He then used his street savvy, other political skills gained his climbing various political movements to bring his nation together.[1]