Hanni Schmitt (died 27 December, 2766[1]) was a Colonel in the Star League Defense Force and the last Commander of the original Royal Black Watch Regiment.

Schmitt's family was famously descended from the country of Wales on Terra.[2] By the later Star League era, the Schmitts had apparently developed a long and distinguished history of serving with the SLDF, with her mother also serving in the military, where she was known to have piloted a Highlander.[3]

Schmitt's granddaughter, Colleen, was born in 2756.[4] While Hanni Schmitt served out her duties to the Star League, both Hanni and her mother told stories to Colleen about the glory of the SLDF.[5][6]

Career and the Royal Black Watch[edit]

Although there is little detail of Schmitt's early career, it is known that she graduated from the prestigious Gunslinger Program, and was therefore considered among the most elite MechWarriors in the entire SLDF.[7][8][9]

Some years prior to 2766, Schmitt, now holding the rank of Colonel, was promoted to command of the Royal Black Watch, the oldest and arguably most prestigious regiment in the SLDF, and the personal bodyguard unit of the First Lord of the Star League. 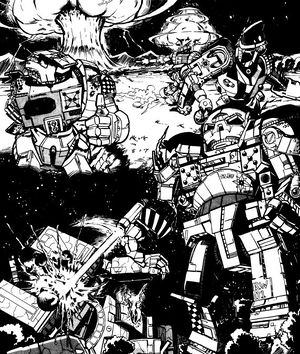 On 12 December, 2766, Schmitt and several other top SLDF officers and Star League nobles met with First Lord Richard Cameron to discuss their concerns about President of the Republic Stefan Amaris of the Rim Worlds Republic. The assembled officials attempted the convince the young First Lord that Amaris was planning some foul-play, and that his presence at court and the presence of Rim Worlds Army troops on Terra was intolerable. Cameron was completely dismissive of their concerns, and had the group forcibly removed from his presence. Schmitt deeply lamented these events, recording her thoughts and fears for the future in her diary.[10]

On 27 December, 2766, Amaris finally struck, assassinating Cameron and unleashing his coup across the Terran Hegemony. The alert went out to the Black Watch and to the palace guards the very moment the laser was fired. The Black Watch battalion on duty, commanded by Schmitt herself, quickly took up positions throughout Unity City while the rest of the regiment rapidly mobilized.[11][12] When an AeroSpace Fighter patrol spotted the Fourth Amaris Dragoons converging on the city from the north, Schmitt led a short company of her troops out to meet them while the rest of her battalion secured the city.[13] Moments later, an atomic strike launched from Amaris' fighters destroyed Fort Cameron, effectively wiping out those elements of the Watch that were still mobilizing. Amaris' personal bodyguard unit then appeared within the city, having been smuggled in through the spaceport. With the overwhelming advantage of surprise, numbers and air support, the Rim World troops soon the few surviving SLDF troops in the city on the run. Schmitt and her eight MechWarriors were now the only SLDF force on hand to oppose Amaris near Unity City.[14] Forced to oppose the Dragoons to give the SLDF any chance of rallying, Schmitt chose Gorst Flats for her and her troops to make their final stand that night.[15][16][17][18][19][20] The Flats were well-suited to a defensive position, with high, forested hills on one side and the waters of Puget Sound on the other. This prevented the Amaris Dragoons from using their numerical superiority to full advantage, forcing them to advance into a meat-grinder. The Dragoons' second battalion spear-headed the advance, with ten Rim World 'Mechs being downed before they could even respond. The Black Watch simply refused to die, completely destroying one company and laid another to waste.[21][22] The Fourth Dragoons' commander, Colonel Armstrong Duket, was desperate to reach Unity City before SLDF reinforcements could reach them. With the apparent approval of Amaris, the Colonel ordered his fighters to launch a nuclear assault to completely destroy Schmitt and her remaining warriors. The battle of Gorst Flats was over.[23][24][25][26][27] Shortly after, the Rim World troops in the city finished off any Black Watch troops who had survived to that point, spelling the end of the legendary command.[28]

Very little in the way of remains were left after Amaris' nuclear assault at Gorst Flats. A hand from a Highlander 'Mech survived, and came into the possession of the Northwind Highlanders, who displayed it as a sacred relic.[29]

Five members of the Black Watch survived the destruction at Fort Cameron, and led by Captain Elizabeth Hazen, they would form the Ghosts of the Black Watch resistance movement. This group would prove a thorn in Amaris' side for years, eventually providing support to the SLDF during the liberation of Terra. They would even serve as Kerensky's personal bodyguard during the final stages of the campaign.[30][31]

Schmitt's granddaughter, Colleen Schmitt, would survive Amaris' coup, finding refuge in the Cascade Mountains and eventually joining the resistance.[32][33] Colleen Schmitt would eventually join Aleksandr Kerensky's Exodus, and would go on to serve as the first Khan of Clan Blood Spirit as well as being the founder of the Schmitt bloodheritage.[34] Therefore, all of the countless warriors descended from the Schmitt bloodheritage - including several Khans - were descended from Hanni Schmitt.

The Royal Black Watch would be re-established under the Second Star League and formed from a semi-secret order within the Northwind Highlanders, who had kept the Black Watch legacy alive. Neil Campbell became the first commander of the Watch since Schmitt's death.[35][36]

In the aftermath of the Burrock Absorption, Schmitt's descendant, Khan Karianna Schmitt, would name the Morrigu fire support vehicle in honor of the Schmitt Welsh heritage, a heritage descended from Hanni Schmitt's actions.[37]

The Journal of Hanni Schmitt[edit]

In 3067, several pieces of information were provided to Sandra Raines of the Interstellar News Network from an unnamed source, but presumed to be Tempest Stryker, the deep-cover agent known as Damocles during the Word of Blake Jihad. These included a number of excerpts purportedly taken from Hanni Schmitt's journal after her death. According to the diary pages, events surrounding the death of the last member of House Cameron to hold the title of First Lord, Richard Cameron, differed from those commonly believed to be true; the major differences highlighted through the diary pages were apparent confirmation that Richard and his wife Elise had twin children, not the single child reported elsewhere, and that those two children - Amanda and Ian Richard - escaped the massacre of the Cameron bloodline in the Unity Palace throne room at the hands of Stefan Amaris as a result of the actions of Schmitt and a small number of other loyal officers. Those officers arranged for Major Ian MacIntosh of the Black Watch and his BattleMech lance to swap Amanda and Ian Richard for another unnamed child and escape from Terra during Amaris' coup aboard the Colossus-class DropShip SLS Abyss while the remainder of the Black Watch distracted the Fourth Amaris Dragoons with a last stand on the Gorst Flats. The Abyss purportedly escaped thanks to covering fire from the Reagan SDS installed on Terra to rendezvous with a waiting WarShip on the dark side of Luna; that WarShip, the SLS Tripitz, then transported the Abyss and its cargo out of the Sol system.[40] This accounting completely contradicts the "official" historical record in many respects, and is somewhat discredited by the fact that many of the other claims within this series of reports were later conclusively disproved.

Schmitt piloted an Atlas as commander of the Royal Black Watch, a variant of the AS7-S variety.[41] The use of this variant may be disputed, as it was not formally introduced until the Clan Invasion centuries later.

Schmitt, at the time of her death, had a Piloting score of 0 and a Gunnery score of 0 in the BattleTech board game.[45]