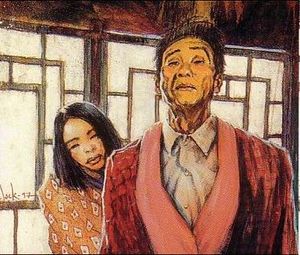 Image of Tormano Liao from the CCG (apocryphal); the woman in the background may or may not be meant to be Hanya No Cha.

Hanya No Cha was born on Brazen Heart, the Capellan Confederation's secret prison colony in the Sarna Commonality, as the daughter of a common family.[1] She was a botanist by profession.[2] Nothing else is known about her background. Chandra Ling referred to her as a "dissident" at one point,[3] but it remains unclear if that was a reference to her outlook or simply because she came from Brazen Heart.

Tormana Liao secretly married Hanya No Cha at some point prior to 3021 (and as of 3026 he had not seen her for five years[3]) in defiance of the wishes of his father Maximilian Liao, Chancellor of the Capellan Confederation.[1] When Tormana refused to divorce her, the Chancellor annulled the marriage by decree but Tormana still maintained her to be his legal wife.[4] Over this, he fell out of favor with his father.[1][3] Tormana subsequently feared for her life and she was smuggled back to the world of her birth by a secret group.[3]

Following Tormana's capture by Davion forces during the Fourth Succession War, he offered to cooperate if they would smuggle his wife out of the Confederation, to which House Davion agreed.[2] They both lived as guests of First Prince Hanse Davion, and established homes on several worlds including New Avalon, Liao, St. Ives and Brazen Heart.[2][4]