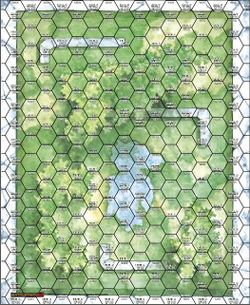 Located in Solaris VII's Xolara region, the Hartford Gardens is a small Class 4 Reaches arena that once was a sprawling estate converted into a BattleMech arena venue, the walls and woods of the Gardens now also features such perils as hidden minefields, weapon turrets and quicksand traps, providing an interesting challenge for combatants. The Arena is located in Xolara "district" of Solaris City.[1] [2]

The Hartford Gardens began life as part of the lush family estate of the Hartford family, owners of HartfordCo Industries. Thanks to the wealth borne of a large number of Star League Defense Force parts contracts, during the Star League era the estate was a shining jewel, the garden filled with exotic flora collected throughout the Inner Sphere, beautiful stone walls surrounding it to keep out the curious and uninvited. The fall of the Star League and the Succession Wars that followed led to the decline of both HartfordCo Industries and the estate, the family's mansion covered with vines as their neglected gardens grew thick and heavy, the estate's centerpiece carp ponds becoming nothing but murky mud holes. As years became decades and centuries, those who knew of the Hartford family feared the estate would eventually be abandoned to rot.[1]

They hadn't counted on the ingenuity of Jimmie Hartford, 78-year old resident of the mansion and heir to the Hartford estate, who used the last of the family's money to convert the gardens into a Class 4 BattleMech arena. His efforts mostly centered around clearing some paths and adding bunkers along the old garden wall for spectators as well as using some of HartfordCo's own technology to add a number of vibramines and weapons turrets scattered through the gardens. While not an overnight success, attendance at the Gardens has been steadily increasing and Jimmie Hartford believes he'll soon be selling out the arena.[1]

While avoiding direct combat during the Word of Blake Jihad, the Hartford Gardens suffered significant damage its aftermath as a result of significantly increased use as both as a practice ground and as an alternative venue for the more war-ravaged arenas. The extent of the damage forced the Gardens' management to close the venue in 3084 for a fourteen-month renovation. Reopening as the "New Hartford Gardens" in 3086, many observers were bemused to see that the "New" Gardens were seemingly identical to the old Gardens before years of battle had taken its toll. Opting for a more evolutionary rather than revolutionary approach, Gardens management focused on enhancing the arena's features over adding new ones - increasing the height and strength of the walls to cope with post-Jihad weapons advances as well making both the mines and weapon turrets more powerful and deadly.[2]

Combat in the Hartford Gardens tends to become games of "cat and mouse", the arena dominated by a number of open areas filled with low rolling hills and old decorative walls from the original architecture of the state providing partial cover, providing large fire zones and allowing 'Mechs to slowly whittle away at each other, hiding behind the natural cover between shots. The Gardens also features several former carp ponds that have been dredged and deepened to a depth of six meters. A number of these are standard water pools, offering the ability for MechWarriors to hide on low-power or cool down, but some have been converted to quicksand pits that can trap and ensnare the unwary, easily concealed under the abundant brush.[1] [2]

As an added threat, the Gardens' also originally had a number of hidden low-power Vibrabombs and randomly firing one-shot SRM-4 or Small Laser turrets scattered about the arena. After the Jihad these were enhanced with more powerful Vibrabombs and Clan technology, the strengthened turrets now sporting either a fifteen-shot Clan-grade Streak SRM-6 and Clan ER Medium Laser. While reportedly their placement is a closely held secret, a number of MechWarriors also seem to display a uncanny knowledge of the locations of vibrabombs and hidden weapon turrets leading some to speculate that this information is sometimes leaked to affect the outcome of matches.[1] [2]

Hartford Gardens features a total seating capacity of 8,000 - 1,000 within box seats with the remainder in general seating section. The general admission seating is within bunkers built into the old Gardens stone walls, while the box seating is situated on elevated platforms at the narrow ends of the arena offering better views of combat below. Admissions pricing reflect the lessor stature of such Reaches arenas - 48 C-Bills for box seating, 12 C-Bills for general seating.[1]

In another example of the difference between the Open Class arenas and those of the Reaches, Hartford Gardens features minimal safety protection for its spectators, in the mid-3050s five spectators were wounded and two killed instantly when a stray missile struck one of the general seating bleachers. The Gardens' management became the target of a number of legal actions from the families impacted by that, but all were abruptly withdrawn after the claimants suffered a number of accidents, rumors abound that Jimmie Hartford arranged for these to avoid difficulties for his arena.[1]