Captain Helmar Valasek (2979 – ????), founder and only ruler of the bandit kingdom Santander's World, was one of the most notorious and successful Periphery pirates of the first half of the 31st century.[1] 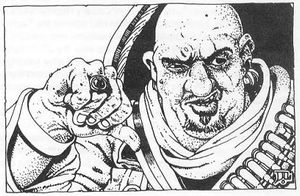 Like many other pirate kings, Helmar Valasek initially embarked on a promising military career in the Inner Sphere. Born in 2979 into an ordinary family on Parma in the Federated Suns, he worked his way up to graduate with honors from Kilbourne Academy. Within a few years of joining the Armed Forces of the Federated Suns he had become one of its youngest captains in history. However, Valasek's quarrelsome personality led to ever-increasing arguments with his superiors, ultimately resulting in him turning rogue.[1]

Valasek defected from the Federated Suns military in 3003 along with a handful of like-minded soldiers and a commandeered drop ship. For the next sixteen years his pirate band led a nomadic life, constantly moving between the Federated Suns, Draconis Combine and Outworlds Alliance space. His many narrow escapes from the authorities only increased his notoriety and following. With the pirate life increasingly taxing his health, in 3019 he finally settled down on the remote planet Santander V in the coreward Periphery, beyond the borders of the Draconis Combine. Requiring all new recruits to swear a blood oath of loyalty and encouraging his pirates to kill anyone suspected of betraying it, Valasek ruled his world with an iron fist and utter amorality. Not content with raiding and plundering, his battalion became infamous as Santander's Killers due to their specialising in covert assassinations and terrorism on Kuritan and Davion worlds. Most of his treasury was sustained by hiring out his pirates to various dissident groups, supplemented by the ransoming of hijacked civilians. Valasek was known to use part of his income to operate an extensive web of informants to warn him of impending retaliatory strikes.[1]

In one notable instance Valasek bloodied forces from the Draconis Combine Mustered Soldiery sent to punish him for a spate of water raids he'd conducted against Combine worlds. Valasek was keen to avoid losing any of his precious 'Mechs, and when the Combine forces arrived in the Santander system he lured them into landing at a predetermined ambush point. Waiting for the Combine forces were several companies of Scorpion light tanks Valasek had "borrowed". The Scorpions had been hidden in warehouses at an obvious supply point, and engaged the Kuritan 'Mechs at close range. The battle swiftly degenerated into a brawl as the Kuritan 'Mechs, outnumbered three-to-one, engaged the tanks in melee attacks. The battle became known as the "Scorpions Nest" and became a staple training exercise in the Combine, teaching trainee MechWarriors in how to deal with swams of small vehicles. Valasek was content to have recovered some 'Mech salvage and the Kuritans were satisfied that Valasek wouldn't raid any more Combine worlds in the near future.[2]

For all the trouble he caused, Valasek surprisingly ruled Santander's World for thirty years, careful to never become more than a serious irritant to his Inner Sphere neighbors who were more occupied with waging war on each other. The invading Clans, however, were neither distracted nor merciful. In August of 3049, forces of Clan Smoke Jaguar landed on the planet in one of the first combat actions of the entire invasion. Valasek ambushed and destroyed the initial landing force, enraging the invaders. Using every trick at their disposal, his mech company held out over a week against an entire assault cluster led by saKhan Sarah Weaver herself. At the pirates' last stand, Weaver's Timber Wolf destroyed Valasek's BattleMaster but discovered that the old captain had not actually been piloting it himself.[3]

Valasek escaped from Santander's World and re-appeared a year later via published diary entries from Vipaava, then part of the Free Rasalhague Republic, and finally 3051 from Tellman IV in the Outworlds Alliance, claiming to have gotten plastic surgery and talking about planning to take revenge on the clans or else joining a colony ship in need of a leader. However at his advanced age of 72, and with his world conquered, his pirates destroyed, and having no known heirs, his once-feared name faded into obscurity.[4]

With a lack of restraint and discipline marking many aspects of his life, by his mid-40s Valasek reportedly already weighed over 300 pounds. Bald and goateed, his nihilist attitude was highlighted by cruelty and avarice. He also showed signs of being manic-depressive, his mood wavering between gleeful enjoyment of torture and murder, moments of manic activity and stretches of bored apathy.[1]