The youngest daughter of Margaret Aten, the Duchess of Skye, Hermione Aten spent much of her childhood in the public eye, surrounded by holovid reporters and aides. Like her mother, she believed it was her duty to see to the needs of her people. As a teenager during Operation BULLDOG and the conflict against the Smoke Jaguars, the young Baroness Aten hosted charity functions in support of Star League Defense Force veterans, showing a genuine regard for her causes. [1]

When the FedCom Civil War began in 3062, Aten returned to Skye with her family, hoping that the horrors of the war would not come burn in the Isle of Skye. The Atens were most concerned with the public speeches of Robert Kelswa-Steiner, Duke of Porrima, heir to the Tamar Pact and leader of the Free Skye Movement. Kelswa-Steiner advocated the seccessionist movement, using the current conflict as a justification. [1] In 3063, the Atens formally linked themselves to Kelswa-Steiner by betrothing Hermione to him. [2] 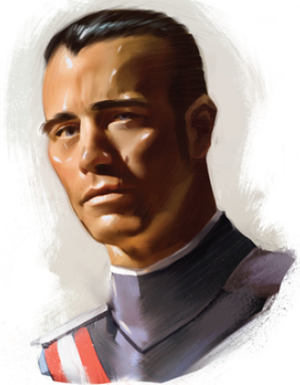 On November 2, 3064, Duchess Margaret and Hermione's sister, Ilse Aten, were assassinated, along with three of their security detail. The culprits escaped, and it remains undetermined who ordered the attack, though some circumstantial evidence exists that Kelswa-Steiner ordered the attack, perhaps even with Hermione's consent. Regardless, the event further destabilized the region. [2] [3] In January 3065, now-Duchess Hermione Aten married Kelswa-Steiner. [4] [5]

This gave Kelswa-Steiner the power base he needed to further press the Free Skye case. In response, on April 16 3065, Archon Katherine Steiner-Davion ordered Duke Kelswa-Steiner arrested on charges of sedition, imprisoning him on distant Donegal. This would not only spark the Free Skye movement to greater action in the form of the Third Skye Rebellion, it would also allow the Duke to deny responsibility should the revolt fail. The Duke's top aide, John Claverhouse Dundee, claimed the title General of the Armies of Skye, nominally in command of the Free Skye Militia, , though none seriously questioned that he was acting on the Duke's behalf. On April 29, a failed assassination attempt was made against Dundee, resulting in the deaths of two bodyguards. Although the culprits were able to escape, the attempt was immediately blamed on Loki terrorist operatives. Dundee used this to further rally support for the Free Skye movement. [6] [7] [8] Dundee and Duchess Aten formed an effective coalition. [5] [9]

Although the rebellion was ultimately put down, the weakened state of the Lyran Alliance and Kelswa-Steiner's support of Peter Steiner-Davion's "pan-Lyran Coalition" meant that the relative power of the Skye Province in overseeing its own affairs had been dramatically improved. [10] Although Duke Robert had expected to dominate his young wife, her experiences during the conflict would lead her to a much greater understanding of the Skye Province's politics. By the time the conflict ended, Duchess Hermione was a capable politician and a full supporter of the Free Skye movement. [9] She and her husband financed a training battalion for the Sanglamore Academy on Skye to provide new recruits to the Skye Rangers who would already be firmly in the Free Skye camp. [11]

In mid-3067, Duchess Aten attended a party on Tharkad where she met with Hauptmann-General Barton Hale of the Quartermaster Corps. She blackmailed Hale with knowledge of the General's illicit insider-trading of military suppliers in order to compel him to help win approval for the purchase of Chimera BattleMechs from the Brigadier Corporation in the Free Worlds League, machines that would then be steered towards units loyal to Free Skye. [12]

Duchess Aten continued to handle matters behind the scenes during the early years of the Word of Blake's Jihad, skillfully manipulating the media, industry and mercenaries as needed. Aten became a great admirer of Devlin Stone and his coalition, particularly after Stone and his allies helped push the invading Blakists' off Skye in 3074. The Duchess focused her time on reconstruction efforts on Skye even her husband took part in Operation SCOUR, issuing tax breaks to companies that aided in the reconstruction of Skye's once-proud industries. [5] She also helped militarily by recruiting mercenaries such as the Raging Horde to help defend Skye, offering newly produced Saxon APC vehicles as bonuses. [13]

It is known that a daughter of Duchess Aten at some point married Gregory Kelswa-Steiner, the illegitimate son of Duke Robert, born years before his marriage to the Duchess. (This despite the fact it would have made them half-siblings.) Their union would produce at least one son, Jasek Kelswa-Steiner. [14]

As a child, Aten was indoctrinated in the belief of Noblesse oblige. She supported many charitable causes which she seemed to genuinely care for.[1] During the early years of the FedCom Civil War, Aten learned quickly, becoming a valuable ally to both her husband and General Dundee.[9] Though her union with Duke Robert was hardly a love-match, the two shared a common love for Skye that helped them to work well together.[5] During her discussion with General Hale, she indicated that she preferred to be called Lady Aten as opposed to Duchess Hermione Kelswa-Steiner, implying a certain independence on her part.[12] She developed into a master manipulator of Skye's media and industry interests, and was more than able and willing to destroy the reputation of those who crossed her. [15] Physically, Aten was described as having a regal poise with a dusky complexion, deep brown eyes and black tresses. She further demonstrated an unexpectedly strong grip.[12]