History of the Free Rasalhague Republic 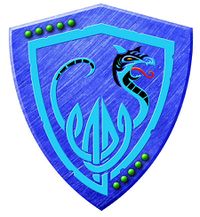 Crest of the Free Rasalhague Republic

The Free Rasalhague Republic's origins lie in the distant past on the home of humanity. After the Second Soviet Civil War the Scandinavian countries of Northern Europe were saddled with the cost of rebuilding the shattered Soviet States and the influx of refugees fleeing the devastation. This lasted into the mid 23rd century when the levy to rebuild ended and many of the citizens of the Federal Republics of Sweden, Finland and Norway chose to emigrate, selecting a planet far from the smothering bureaucracy of Terra. For the next 60 years a steady stream of colonists populated the planet Rasalhague and eight of its nearest neighbors.[1]

In the waning years of the 23rd century the settlers created the Rasalhague Consortium to oversee the development of their worlds. The rulers of each of the settled worlds, the Varldherren or World Lords, as well as members of the most powerful and influential families, became the ruling council. An elected Prime Minister headed this governing council. The Consortium reached out to the neighboring states and associations, eventually evolving into the Principality of Rasalhague, led by an elected Prince.[1]

The people of the Principality became known for their isolationism, preferring to concentrate on development of their own worlds and expanding their influence within their established boundaries. They concentrated on developing in ways that would not impact their worlds' environment. This political neutrality and isolationism policy lasted until their eventual conquest and absorption into the Draconis Combine in 2330 [1]

The leadership of the Draconis Combine organized the newly conquered territory into the Rasalhague Military District. Though they attempted to dilute the native customs and lessen the nationalistic tendencies of the Scandinavian population through promoting emigration of settlers from the other regions of the Combine, they were ultimately unsuccessful. From the beginning of Kurita rule secret societies formed and fomented rebellions, but the native resistance failed due to lack of coordination and organization among the rebel groups. This changed in 3029 when representatives of the Lyran Commonwealth invited the resistance leaders to Tamar to meet and plan for the eventual freedom of the Rasalhague peoples. [1]

The Lyran government showed their support in a very concrete fashion, presenting to the leaders of the rebellion a regiment of assault 'Mechs manned by Rasalhague exiles and patriots, trained and supported by House Steiner.[1] The Tyr Regiment made its presence known in dramatic fashion with its first action on the planet Kirchbach, prompting a revolt among the population in support of the Regiment. With the Tyr Regiment as a core the Rasalhague leaders planned an uprising to coincide with invasions by the LCAF. The leaders of the rebellion organized and dispatched hundreds of commando and covert missions deep into Draconis space to disrupt communications and logistics for the Draconis Military Command and to spread the word of the coming rebellion. To show full support of the desires of the Rasalhague peoples for a free and separate nation Archon Katrina Steiner signed the Intention of the Free Rasalhague Peoples, a document recognizing the Tyr as an official government in exile for the Rasalhague regions.[2]

The Tyr provided the Lyran military valuable information regarding local conditions, terrain, targets of opportunity and location of enemy forces. This information proved invaluable during the course of the Fourth Succession War and in the success of the Commonwealth's war efforts.[2]

To the dismay of the Tyr, the end of the Fourth Succession war did not bring about the creation of the Free Rasalhague nation. This was due to the the failure of the Lyran Commonwealth forces to conquer all of the former Principality worlds, most importantly they had not captured Rasalhague itself. Some Tyr members believed the Lyrans had stopped short of complete conquest to prevent the rebels from forming the promised sovereign state of Rasalhague. This belief seemed to prove true when Lyran planetary administrators arrived on the newly conquered worlds, taking over the governing duties without acknowledging the Tyr claims. These functionaries were sent by Duke Selvin Kelswa of the Tamar Pact to take control of these worlds, and no mention of Tyr prior claim was noted or acknowledged in their orders.[2]

In February 3031 several of the more extreme factions of the Tyr bombed government buildings on seven of the newly conquered worlds, destroying the buildings and injuring one planetary administrator. Over the objections of Commonwealth officials Duke Kelswa ordered the arrest of Tyr leaders, most of whom were on Tamar and then orchestrated show trials that convicted the arrested leaders in a mockery of Lyran judicial process. This led to riots and demonstrations on the captured worlds which were brutally put down by the Tamar Pact police force. By the time the Archon heard of this miscarriage of justice the Tyr leaders had been languishing in jail for a week. Infuriated by the Dukes handling of the situation she publicly berated the Duke for overstepping his authority and freed the imprisoned Tyr leaders. Though she apologized to the leadership, the damage caused by Duke Kelswa could not be undone and rebellion and unrest raged on the conquered worlds.[2]

The Archon, realizing that the region would not be willing to become part of the Commonwealth bent her efforts to negotiate with the Tyr leadership to ensure that the new Rasalhague state would be more favorably inclined to the Commonwealth than towards the Draconis Combine.[2]

On the worlds of Rasalhague that still remained under Draconis control rebellion continued. To end the fighting against their own people the Draconis Combine came up with an ingenious and subtle solution, they announced their support of Rasalhague independence. This shift in policy simultaneously ended their own problem with rebellion in the war torn district while at the same time embarrassing the Lyrans and depriving them of many of the worlds they had worked so hard to capture. Also, a Free Rasalhague would form a buffer state between the Draconis Combine and the newly formidable Lyran Commonwealth.[2]

On March 13 of 3034 newly elected Prince Haakon Magnusson declared the formation of the Free Rasalhague Republic, free and independent of any other nation. Comstar was first to recognize the formation of the new nation, soon followed by the Draconis Combine on the following day. The act of the Combine in giving up so many of its worlds to the newly formed sovereign nation came as a shock to the rest of the Inner Sphere. Also, it left the Steiner government in a poor position, lessening their bargaining power in regards to the Tyr that were on the Rasalhague worlds still in the Commonwealth. As a result of the actions of the Kurita government Archon Steiner felt obliged and compelled to turn over the capture Rasalhague worlds to the newly formed nation, though this infuriated the Duke of Tamar.[2]

The birth of the new nation was not without pangs and turbulence. The decision of the Draconis Combine to cede these worlds did not sit well with many of the Combines soldiery. Many units for various reasons both good and bad refused to leave the worlds they had defended for so long. Seeing this as a challenge to his rule Kanrei Theodore Kurita declared these disobedient units Ronin and with the permission of the new Prince of Rasalhague led a force of loyal regiments into the Republic in what became known as the Ronin Wars.[2]

The Rasalhague KungsArmé received its baptism by fire in a series of short, violent clashes with the Ronin forces. Supported by the DCMS units led by the Warlord Theodore Kurita the KungsArmé fought better than expected. Ably supported by Lyran officers on loan and by the Combines military units the Rasalhague forces were eventually victorious, though the war would have a lasting impression on the new Rasalhague government and its peoples. By 3035 the last Combine unit left Rasalhague space, ending the Ronin War. This outbreak of peace allowed the government and their elected Prince to concentrate on political rather than military objectives for the first time in the new nations history.[2]

One sad note during this time was the outbreak of violence against anything Oriental that broke out among some of the population. Riots were relatively common and lynchings and other violence was focused on those not of Scandinavian heritage. Eventually the government calmed the people and this shameful matter is rarely if ever mentioned.[2]

The Prince and his new government tread a narrow line, balancing their new nations concerns between those of their more powerful neighbors. This careful policy of neutrality has kept the borders to these two realms relatively peaceful and has allowed the KungsArmé to grow into a stronger more mature armed force.[2]

Recently pirate activity along the Periphery borders of the FRR has increased dramatically, forcing the government to hire mercenaries to patrol these areas. It is an indication of the seriousness of this Periphery activity that the FRR is hiring mercenary forces even though the general distrust of mercenaries engendered by their actions during the Ronin Wars remains.[2]