History of the Outworlds Alliance 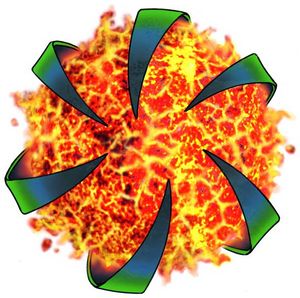 Crest of the Outworlds Alliance

At the outset of the Star League, the Outworlds Alliance was considered a backwater full of peaceniks. When the Reunification War began, the Star League initially deigned to garrison the Alliance "for mutual defense and protection", and Star League Directive 21 was approved by Prime Minister Catherine Avellar, not by President Grigori Avellar. Tensions rose with foreign garrisons left on Alliance worlds, leading to the Santiago Massacre late in 2572.

The Santiago Massacre set off a chain of events throughout human-occupied space, leading to the Pollux Proclamation in 2575. Within two years, SLDF and DCMS troops sat poised on the border, intent on forcing the Alliance to join the nascent Star League. Such a posture led President Grigori Avellar to seek help, which he found through a secret treaty signed with the Federated Suns in 2581, on the eve of hostilities. As part of the agreement, the Outworlds Alliance were given a brigade of elite soldiers mustered from the Davion Brigade of Guards in return for twelve border systems.

The Pitcairn Legion managed to make conquest of the Outworlds Alliance costly. Originally faced with small, volunteer infantry garrisons and a motley assortment of ~120 BattleMechs or coverted IndustrialMechs, the SLDF now had to fight a battle-hardened foe. Ultimately, the deal paid off for the Alliance - the Peace of Cerberus was signed in 2585, after just 4 years of war. Though the Alliance had lost much of its territory, suffered over 12 million civilian casualties, and worlds conquered by the sadistic General Amos Forlough were torched, the Alliance was not conquered, and its core was not made ruin.

In failing health due to the Reunification War, Grigori Avellar died of heart failure in 2587. His successor, Barton Avellar, proved ultimately incapable of the Presidency - Grigori's policies always relied on hiding behind the Davion/Kurita enmity, a subtlety that Barton did not understand.

Barton was replaced by a Kurita-backed coup, placing Rodrigo Avellar on the throne. The coup quickly backfired on the Draconis Combine; Rodrigo was not only capable, his fiscal policies tended to always get the better of the Combine. Before long, the Alliance had also issued "Most Favored Nation" trade status to (paradoxically) both the Draconis Combine and the Federated Suns. Through his political acumen, Rodrigo was also able to make the Star League Defense Force garrisons stationed within his realm accountable to local laws and law enforcement, and ultimately withdrawn by 2607.

Rodrigo died in 2628 of a massive seizure, leaving his niece (a renaissance woman) Caryn Avellar as President of the Parliament. Unfortunately, Caryn had a severe break with reality, declaring the Star League dissolved and convening the "New Star League" on Alpheratz in 2634. While Caryn was led away to her "new office", Caryn's naïve brother, Peter Avellar, became the next President. A selfish, lazy man, popular morale declined. Declining work ethic may have shortened Peter's life - poor maintenance led to Peter's fatal skimmer crash in 2640. Caryn's son, Adolfo Avellar, became the next President of the Parliament in 2642. During Adolfo's reign, the Alliance successfully negotiated away foreign tariffs and passport restrictions against the Alliance, and repealed laws forbidding Alliance citizens from working for the Star League.

During the Star League era the Outworlds Alliance was considered to be relatively peaceful, with a meek government. Compared to the other Territorial States, the Alliance was considered a safe place for settlers from the Inner Sphere to migrate to; only the Rim Worlds Republic received more settlers from the Terran Hegemony than the Alliance, and settlers from both the Draconis Combine and Federated Suns joined those from the Hegemony in colonization efforts within the largely-passive Alliance. The result was considerable expansion further into the Periphery, with numerous worlds settled, predominantly either as mining colonies or the holdings of avaricious corporations, and the mix of settlers gave the Alliance population a distinctly polyglot nature. Many of the colonies existed simply to feed the markets of the Inner Sphere with a combination of rare minerals, and goods that could be made far more cheaply by the laborers of the Alliance, free of the various regulations that covered labor and work within the realms of the Great Houses.[1] At its peak, the Alliance contained hundreds of worlds, divided between seven administrative districts: the Alpheratz Province, Baliggora Province, Blommestein Province, Cerberus Province, Onverwacht Province, Ramora Province and Trader's Domain.[2]

Like the other states of the Star League, the Outworlds Alliance was able to avoid the horrors of war, but only unwittingly. In 2765, Parliamentary President Beatrice Avellar died of old age. Beatrice's daughter, the dull Allyce Avellar, was approved as the next Parliamentary President. When the Amaris Civil War started in early 2766, Allyce sincerely liked Stefan Amaris and Aleksandr Kerensky, both of whom had sought her aid: rather than choosing a side, Allyce chose to remain neutral simply because she could not bring herself to make a choice. Ultimately, the move paid off, however her indecision led her brother, Simpson Avellar, to place her under house arrest in 2772. The Outwords Alliance Parliament refused to recognize Simpson as the new head of state, so Allyce's son, David Avellar, was confirmed as the new President.

During the Periphery Uprising the majority of the worlds of the Blommestein Province, Onverwacht Province and Trader's Domain remained loyal to the Star League; the worlds had largely been settled by colonists from the Inner Sphere, and felt no loyalty to the weak central government of the Alliance.[1]

While the majority of the worlds within the Alliance were habitable, to a lesser or greater extent, the eruption of the Succession Wars left many in a parlous state. The majority of worlds - particularly those colonised during the Star League era - had small and largely transient or temporary populations consisting of factory workers and miners, dependent on trade with the Inner Sphere for everything from food to supplies of replacement parts, and some colonies were even worse off, relying on advanced technology to remain habitable. Worlds across the Alliance soon began to become impoverished, and problems escalated as the corporations that owned many of the colonies recalled their JumpShips to respond to wartime demands. Those small populations who could, fled; many more simply withered away.[1]

Where outer worlds of the Alliance had larger populations, many planetary governments began hiring mercenaries, ignoring objections from the Alliance government. Pirate raids began increasingly steadily, and many of the more desperate colony worlds began raiding their neighbors for acquire what they needed to survive. As the government on Alpheratz proved increasingly incapable of dealing with the pirate and raiding activity, worlds began to secede from the Allliance, either individually or in small groups.[1] In 2385, Wynn's Roost - the administrative capital of the Trader's Domain province - seceded. The secession was prompted by the Alliance government impounding a mercenary force on Alpheratz that the government of Wynn's Roost had hired for protection, followed by a raid in 2833 that the Roosters believed had been launched by Onverwacht that inadvertently destroyed a fusion engine factory that had been the result of a decade of careful work and investment by the government of Wynn's Roost, in an effort to support both the local population and that of other worlds in the local region.[3]

Wynn's Roost took most of the worlds of the Trader's Domain with it when it seceded, and the worlds briefly formed a nation of the same name, but it proved impossible for the government on Wynn's Roost to get the various worlds to get together because of sectarian differences amongst the population; the worlds with populations of Federated Suns origins wouldn't cooperate with those worlds that had populations originating from the Draconis Combine, while those worlds predominantly occupied by settlers from the Terran Hegemony remained loyal to the Hegemony, and blamed the other worlds for the Hegemony's collapse and annexation. Complicating things further, many individual planets came to be ruled by individuals who fancied themselves local rulers, and the number of JumpShips operating in the local region steadily diminished as the worlds lost the ability to maintain them. The Alliance continued to be plagued by pirates throughout this period; even as those pirate bands that originated on the failing colony worlds began to die off, they were replaced by bands formed from the remnants of military units fleeing the Wars.[1]

Since the beginning of the 31st century, the situation in the Outworlds Alliance has become particularly grim. With the general loss of technology, Alliance worlds have suffered from declining population and literacy levels. Though protected by a strong military, many of these planets are unable to feed their own people. The people feel that their government has betrayed them, and there have been many riots and demonstrations against the hereditary Avellar regime in recent years. Although no one has yet seriously challenged the right of House Avellar to rule the Outworlds, armed rebellion is likely if the deteriorating situation does not reverse itself.

In late February 3075, diplomats from the Federated Suns travelled to Alliance space to negotiate with Clan Snow Raven. As well as a peace settlement, the negotiators hoped to arrange for the release of captured personnel from the 3rd Crucis Lancers and for the Snow Ravens to contribute aid to the coalition assembled by Devlin Stone. While the negotiations did result in assurances from the Snow Ravens that they wouldn't strike at the Federated Suns again unless provoked, the Clan refused to contribute to the allied coalition and claimed all of the captured AFFS personnel as isorla.[4][5]

Media on the Federated Suns world of Altoona reported in late January 3081 that no less than four seperate convoys of immigrants from the Outworlds Alliance had travelled through the Altoona system since the end of the Jihad. Despite DropShips from the convoys landing on Altoona to trade goods for supplies, none of the groups were prepared to discuss the final destination of any of the convoys. Given the distance between Altoona and the Outworlds Alliance border, it was speculated that the convoys were moving to another Periphery nation following changes within the Alliance itself.[6]

The Snow Ravens withdrew back to Alliance space in the wake of the Jihad, but the Alliance Military Corps found itself having to garrison a number of Alliance worlds despite the Snow Ravens supposedly taking on responsibility for defending the Alliance because of the diminished size of the Snow Raven touman. This led to some criticism of the alliance between the two factions.[7]