Vladimir "Ivan" Sorenson[3] was an officer of the Draconis Combine and the last Warlord of the Rasalhague Military District before the formation of the Free Rasalhague Republic. 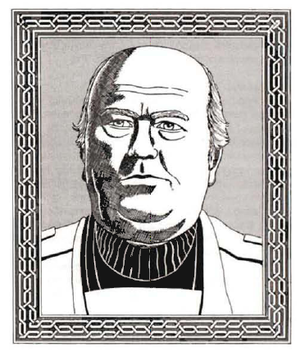 Sorenson was born on the backwater planet Echo in the Pesht Military District. He became involved in gang activity, but he turned traitor on his confederates when the authorities moved in. Sorenson himself was assigned to hard labor on a DCMS base. He eventually gained the notice of one of the officers there, who helped him test out as a MechWarrior. He graduated from the Pesht District Gymnasium with honors.

Though an excellent MechWarrior, early on Sorenson was considered too undisciplined for an officer. After being assigned to lead several BattleMech charges, he learned to temper his anger and soon demonstrated excellent tactical and strategic ability. He qualified for officer training, and eventually found himself commanding various units along the Periphery border. During this time, he first came to the attention of Takashi Kurita, who would soon assume the role of Coordinator upon the death of Hohiro Kurita.

In Service to the Dragon[edit]

By 3019, Sorenson had achieved the rank of Tai-sho on the staff of Marcus Kurita, Warlord of the Rasalhague Military District. He was assigned to personally escort the Coordinator on the last leg of the voyage to Rasalhague to attend the wedding of Takashi’s heir, Theodore Kurita, to the daughter of the district governor. While still in orbit of the planet, their DropShip was sabotaged as part of an assassination attempt on the Coordinator. With quick thinking, Sorenson managed to save himself and Takashi by bailing out of the doomed DropShip in his BattleMech, using his 'Mech’s jump jets to guide their descent and manage a crash landing. Though injured, he survived, and was soon rewarded with a promotion to Warlord. (In addition, Takashi clearly suspected Marcus Kurita of being party to the attempt on his life.) [4]

When Marcus Kurita was relieved as Warlord of Rasalhague and made commanding officer of the Otomo, Ivan Sorenson was appointed Warlord by Takashi Kurita.[5]

In 3028, the Lyran Commonwealth conducted a massive invasion of the Combine as part of the Fourth Succession War. Sorenson was hard-pressed to effectively fight off the attacks on his district, and a large number of planets were lost. Particularly embarrassing was the assistance Rasalhague partisans provided to the Lyrans. Despite these setbacks, Sorenson was not removed from his position.

According to an apocryphal scenario[6], Ivan Sorenson masterminded a plan to conquer Suk II with minimal forces at some point between the Fourth Succession War and the formation of the Free Rasalhague Republic. Because of the heavy losses the DCMS had sufferen in the Fourth Succession War, the attack was carried out (primarily) by the Tooth of Ymir mercenary unit but the defenders - Hansen's Roughriders and a minor mercenary unit implied to have been Cameron's Legion - ultimately thwarted the plan.

Death and the Free Rasalhague Republic[edit]

Sorenson was killed in a traffic accident on March 13, 3034, while on his way to the press conference where Christian Månsdottir announced the formation of the Republic.[7] It is implied, though ultimately unproven, that Theodore Kurita and his supporters engineered his death, believing that Sorenson would never support the Republic’s birth unless directly ordered to do so by Takashi Kurita.[8] Marcus Kurita attempted to hold the District, resulting in the brief Ronin War. With the assistance of forces loyal to Theodore Kurita, the Republic would survive this conflict.

Sorenson was considered a talented but blustering officer. Though a capable field commander, his planning skills seemed grossly insufficient for coordinating an entire district. Nevertheless, he apparently inspired enough loyalty in the troops under his command that they sided with Marcus Kurita after his death. In his later years, he was well known for his fierce loyalty and respect to Takashi Kurita. Indeed, Sorenson seemed to be one of the few Warlords whose loyalty Takashi never openly questioned.

At the time of the assassination attempt on Takashi Kurita in 3019, Sorenson was piloting a Grasshopper 'Mech, which was sacrificed to save the Coordinator.[9] When he was promoted to Warlord, he was awarded an Atlas by the thankful Coordinator.[10]