Jackson Kennard Davion was the third of seven children borne by Yvonne Davion.[3] Jackson was a Marshal of the Armies and Prince's Champion of the Federated Suns. He led the Armed Forces of the Federated Commonwealth during the FedCom Civil War and the first half of the Jihad.

Jackson Davion was born in Stirling on Argyle in the Federated Suns.[3] 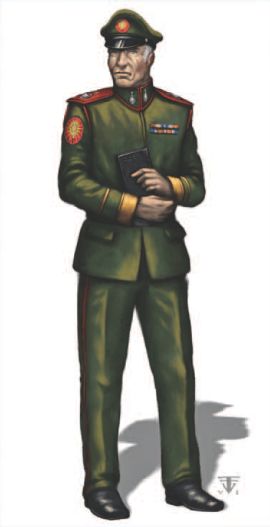 Jackson Davion Marshal of the Armies

Jackson was a career military man, like his mother and all of his siblings. At the age of seventeen he enrolled at Albion Military Academy and graduated when he was twenty. He joined the prestigious Davion Assault Guards and rose through the ranks. By the age of 26, Jackson was the executive officer of the BattleMech regiment. He was promoted to command of the Second Crucis Lancers, where he served for six years. In 3032, Jackson replaced Stephen Davion as CO of the titular First Davion Guards. He commanded that unit for four years, after which he was promoted to CO of the Crucis March Coreward Combat Theater. In 3042, Jackson took over command of the Capellan March (Morgan Hasek-Davion, the head of the Hasek family who had hereditary command of the Capellan March was promoted to Marshal of the Armies of the Federated Commonwealth). Three years later, Jackson was promoted to serve directly under Morgan as CO of the Federated Suns State Command, which made him responsible for half of the Federated Commonwealth. After Morgan's death in 3060, Jackson succeeded him as Marshal of the Armies.[4]

Jackson served Katherine Steiner-Davion during the FedCom Civil War that pitted her against her brother Victor because he believed her to be the legal ruler of the Federated Suns.[3]

Jackson prosecuted the war on Katherine's behalf, even after Victor's allegation before the Star League Council that she ordered the assassination of her mother, Melissa Steiner. It was not until the final push by Victor's forces onto New Avalon that an agent of Victor's delivered evidence of Katherine's culpability in the assassination and he was able to verify parts of it that Jackson was convinced. On 28 March 3067, Jackson resigned his commission personally to Katherine, careful to maintain a neutral stance, lest he become a "casualty of war".[5] The Civil War officially ended on 20 April 3067.[6]

Following the end of the Civil War, Victor asked Jackson to return as both Marshal of the Armies and Prince's Champion, to which Jackson agreed.[7]

Jackson was on New Avalon when the Star League disbanded at Fourth Whitting Conference in 3067 and the Word of Blake launched their Jihad on the Inner Sphere. Following their flight from Tharkad, Prince-Regent Yvonne Steiner-Davion and Tancred Sandoval went into hiding, leaving Jackson and George Hasek as the two most visible leaders in the Federated Suns.[8]

Jackson took personal charge of the defense of New Avalon when the Word of Blake invaded on 5 December 3067. The Blakist troops may have been hunting for him, since they were focused on Avalon City and the palace.[9] In March 3068, Jackson traveled to Markesan and made a public statement about the state of the Suns and New Avalon.[10][11]

Jackson Davion died defending New Avalon on the front lines from Word of Blake on 4 February 3073. Precentor Avitue, the commander of Blakist forces on New Avalon, intentionally breached the fusion engine reactor in her Grim Reaper while grappling with Jackson's BattleMaster, killing him in a massive explosion.[2][12] He was succeeded as Marshal of the Armies by Jon Davion.[13]