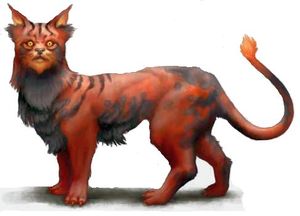 The Jardinian Fire Cat (Panteras Ignus Jardinalis) was an alien species described by Dr. Amanda Holyfield on or shortly before April 3067 in an article named "Panteras Ignus Jardinalis - A New Link?". It was a zoological re-discovery, as all traces of the species and especially its homeworld, Jardine, had been lost for some 200 years.[1]

The Jardinian Fire Cat was described as an alien feline with a scarlet coat and golden eyes that seemed to glow even in daylight. It was capable of spitting a toxic venom that could sear flesh and dissolve vegetation in seconds.

Their natural environment appears to be rainforest. Pictures showed a Fire Cat and her cubs lying and playing in such terrain.

A mummified carcass of the lost species was held at the Regulan Historical Zoology Museum.

The Fire Cat shared the same ecosystem with the Tabiranth and had similar cranial features.

On Jardine, salted firecat soup was consumed by humans, but it remains unclear if it merely borrowed its name from the species or if the Fire Cat is actually edible.

The report on the Jardinian Fire Cat was removed from all sources within less than a week of its publication and several prominent xenobiologists declared the find as a hoax. Dr. Holyfield died in an explosion in her laboratory three days earlier.

Although the impression is given that this was a cover-up aimed at preserving the secrecy of the world Jardine, the fact remains that the scientific community challenged the find as a hoax. There is no information on whether these allegations were ever falsified or retracted.