Jason Youngblood (b. ca. 3010[2] – d. 3???) was the son of Jeremiah Youngblood. As an 18-year old MechWarrior cadet at the Pacifica Training School, he re-created the Crescent Hawks and took command of the unit to fend off a Draconis Combine attack on Chara III in 3028. Subsequently, he was promoted to Lieutenant and given the unit as his own by Katrina Steiner. He led the unit at least up to the Battle of Luthien in late 3051, whereupon the Hawks were relieved of active duty and placed in charge of training a new generation of MechWarriors on anti-Clan tactics.

Jason Youngblood had a son named Jeremiah after his grandfather (Jason's father)[3].

For most of his career Jason Youngblood piloted the Phoenix Hawk LAM he inherited from his father. After it suffered crippling damage during the Crescent Hawks' participation in the Battle of Luthien, he started piloting an ordinary Star League-era Phoenix Hawk instead. [4] 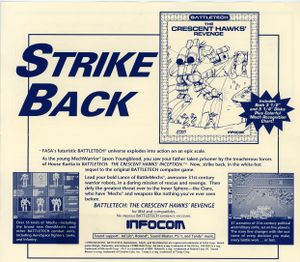 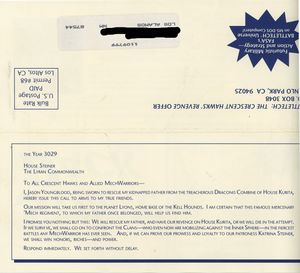 Ad Flyer reverse
In an advertisement flyer for the computer game BattleTech: The Crescent Hawks' Revenge, Jeremiah's son Jason (born in 3010) rallies the Crescent Hawks in 3029, announcing they will rescue his father and later confront the Clans "who even now are mobilizing against the Inner Sphere"—knowledge he should not have as an Inner Sphere citizen.

If taken at face value, Jason's knowledge of the Clans mobilizing against the Inner Sphere as early as 3029 can only be explained by assuming that he learned of this from a Clan descendant who secretly came to the Inner Sphere with Wolf's Dragoons, possibly a parent.

Fans have speculated[5] that his father Jeremiah Youngblood might have transferred from the Dragoons to Snord's Irregulars, where he could have acquired his Phoenix Hawk LAM in the Irregulars' battle against the Marik 405th Aerospace Wing on Alula Australis (where they fought several LAMs and emerged victorious). In 3012, Snord's Irregulars and the Kell Hounds fought together against Marik forces on Castor. Snord is noted to have befriended the Kells, and Jeremiah Youngblood is first mentioned as a Kell Hounds member in this engagement.[6] He could conceivably have transferred from Snord's Irregulars to the Kell Hounds then.

However, since the Youngblood family is described to go back to the early Age of War, it has alternatively been suggested that it would have to have been his mother, not his father, who may have been of Clan origin.

When asked about the issue, Line Developer Herbert A. Beas II simply answered "No", apparently dismissing the theory altogether.[7]

This issue is also raised in Jason Youngblood's own profile in Spotlight On: Crescent Hawks, but the character dismisses such claims as rumormongering. [8]