John Dundee (also known as John Claverhouse Dundee) was an officer in the Lyran Alliance Armed Forces and later with the Free Skye Movement. He served as Duke Robert Kelswa-Steiner's second-in-command during the FedCom Civil War and the Jihad. 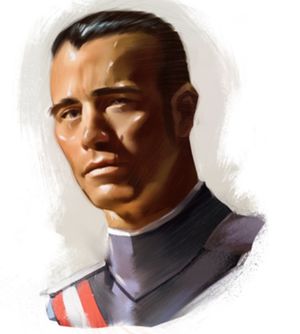 Little is known of Dundee's early life, though it may be presumed that he is a native to the Isle of Skye. Some time prior to 3065, he had achieved the rank of General as top military advisor to Duke Kelswa-Steiner. [1]

During the FedCom Civil War, secessionist sentiment in the Isle of Skye reached to a near all-time high. In response, on April 16 3065, Archon Katherine Steiner-Davion ordered Duke Kelswa-Steiner arrested on charges of sedition, imprisoning him on distant Donegal. This would not only spark the Free Skye movement to greater action with the Third Skye Rebellion, it would also allow the Duke to deny responsibility should the revolt fail. Dundee was nominally in command of the Free Skye Militia, claiming the title General of the Armies of Skye, though none seriously questioned that he was acting on the Duke's behalf. On April 29, a failed assassination attempt was made against Dundee, resulting in the deaths of two bodyguards. Although the culprits were able to escape, the attempt was immediately blamed on Loki terrorist operatives. Dundee used this to further rally support for the Free Skye movement. [2] [3] [4] Dundee formed an effective coalition with the Duchess, Hermione Aten, who had married the Duke only a few months before. [5]

The Skye Jaegers had a major role in the early conflict. Though officially still loyal to Tharkad, the Jaegers did nothing to suppress the protestors on Skye. [2] When the loyalist 11th Lyran Regulars arrived on July 22, 3065 to deal with the Free Skye leadership, Dundee allowed the Regulars to land, then launched an all-out assault using the Jaegers and the planetary militia. The loyalists lost a full battalion of troops before they were able to retreat to Alphecca and inform the Lyran leadership of their situation. They did, however, leave commando troops to take part in an insurgency against the provisional Free Skye government. [6] [7]

Sometime during the rebellion, two of Dundee's top lieutenants were captured by the infamous Bounty Hunter and were turned over to General Caesar Steiner, in an action announcing the Hunter's return to service. [8] This would eventually help to end the revolt. It was unclear if Steiner ordered or paid for this action.

In mid-June, Dundee committed the bulk of his forces into one deciding battle : Hesperus II, and its massive Defiance Industries factory, the largest battlemech production center in the Inner Sphere. Fourteen times over the centuries, the enemies of the Lyran Commonwealth had attempted to seize this vital facility, and fourteen times the Lyrans would rally to repel the attackers. [9] After the Free Skye task force made planet fall on Hesperus, Leftenant-General William Harrison von Frisch, the commander of the Fourth Skye Rangers, sent a message back to Dundee on Skye via JumpShip to avoid being intercepted by the enemy. He further ordered that the JumpShip captain personally hand deliver the message to Dundee. [1]

The Fifteenth Battle of Hesperus II proved to be not only the pivotal battle of the Third Skye Rebellion, but also one of the key battles of the FedCom Civil War. Representing the Free Skye forces were the 22nd Skye Rangers, the 4th Skye Rangers, the Warships LAS Illustrious and the FCS Indefatigable. Defending the planet on behalf of the Lyran Alliance were the Gray Death Legion, the 15th and the 36th Lyran Guards, and the Defiance Self-Protection Force, a corporate military unit. In orbit was the Warship FSS Simon Davion. Early in the campaign, the Illustrious was destroyed but the Simon Davion was captured by the Free Skye forces, giving the invaders a decisive advantage in orbit. After initial skirmishing, the two Skye regiments lifted off the planet, only to drop directly on the target factory, leaving the divided defenders in a desperate position. Orbital bombardment by the Free Skye forces destroyed an HPG Station, killing hundreds of civilians, and dealt tremendous damage to the 15th Lyran Guards. When the 32nd Lyran Guards joined the attack in support of Free Skye, the campaign appeared lost for the loyalists. The Gray Death Legion spent itself holding off the Rangers, losing most of its troops and its commander, Colonel Lori Kalmar Carlyle. The 32nd Lyran Guards had lost their own commander, however, and were now plagued by dissent. The Twenty-second Rangers were shattered, while the Fourth and Seventeenth Rangers were mauled. Realizing he was already committed, Dundee his reserves, sending in the pro-Skye 14th Lyran Guards arrived with Maria Esteban in command, inflicting heavy losses on the 32nd Guards. Despite all of this, the loyalists still held the massive Defiance Industries factory while the rebels had been ravaged, demoralized and had lost the element of surprise. The Leftenant-General William Harrison von Frisch and the Fourth Skye Rangers abandoned the battle, returning to Skye. Esteban made one last push for the factory, neutralizing much of the Defiance SPF and reaching the gates of the legendary facility. Loyalist Battle Armor units, however, managed to regain control of the situation, and the Free Skye forces, facing a suddenly resurgent SDF and 15th Lyran Guards, were forced to retreat. When Caesar Steiner arrived with the pro-Lyran 2nd Donegal Guards, Esteban and her forces surrendered in January 3066. [1] [4] [10] [11]

There were other serious battles, as well, on Freedom and on Skye itself. On Freedom, the Alexandria and Accrington FTMs, in service to Free Skye, assaulted the weakened pro-Katherine 5th Lyran Regulars. Though they suffered serious losses to the more experienced Regulars, the two Militia units were able to cut off their enemies from basic supplies, including food and water. When Maria Esteban arrived with pro-Skye defectors from the 11th Arcturan Guards to take command, events shifted decidedly in Skye's favor. By February 3066, Free Skye had claimed the planet. [4] [12]

Meanwhile, Leutnant-General Linda McDonald was leading the loyalist elements of the Eleventh Arcturan Guards in a renewed assault on Skye itself. With good intelligence on the disposition of the First Skye Jaegers, they successfully landed on the planet intact. The Eleventh Arcturan had been battle-hardened from chasing Victor Steiner-Davion nearly halfway across the Inner Sphere, and were more than a match for the Skye Jaegers and the planetary militia. Dundee personally commanded the Skye defenses, and quickly began a mobile campaign against the loyalists. When the Fourth Skye Rangers arrived having retreated from Hesperus, the Arcturans paused in their pursuit of the Jaegers, instead focused on the capital city of New Glasgow. At that point, however, McDonald received a recall order from General of the Armies Nondi Steiner, recalling her and her troops to Tharkad in preparation for an upcoming assault by allied forces. [7] [13] Skye would remained in the hands of Free Skye, under Dundee's command.

Despite these achievements, however, the fighting on Hesperus had drained the Free Skye military of too much of its strength and momentum for the rebellion to succeed. Fortunately, by this time, Duke Kelswa-Steiner had been released from prison by Duke Morgan Kell and Peter Steiner-Davion. By joining Peter's pan-Lyran coalition to take Tharkad and usurp his sister as Archon, the Duke secured a greater autonomy in the new Lyran order. [4] In the aftermath of the FedCom Civil War, Dundee remained as Robert's principal military advisor. It was clear, however, that if he left the borders of the Skye Province, new Archon Peter Steiner-Davion would arrest and prosecute him for his actions during the rebellion. [14]

As of April 3071, Dundee was still serving on Duke Robert's staff. He called for a complete shutdown of the mercenary business on Galatea, one of the premier hiring centers left in the Inner Sphere. Dundee claimed that the open policies on Galatea made it too convenient for the Word of Blake and other enemies of the Alliance to hire troops to use against the Skye Province. [15] Ironically, the Blakists themselves would shutdown and occupy Galatea in October 3072. [16] [17]

Dundee was regarded as completely loyal to Duke Kelswa-Steiner and the principles of the Free Skye movement. Though he could be arrogant, his preferred tactics in battle showed none of the Lyran "social general" stigma, nor an over-reliance on assault 'mechs in a standup fight. These qualities served him well against the Eleventh Arcturan, when he chose to conduct a mobile campaign rather than watch his out-matched troops be slaughtered. [13] It was taken as a given that Dundee was acting on Kelswa-Steiner's behalf even when the Duke was under arrest. [5] Dundee also showed a clear dislike for mercenaries, not only by the views he expressed towards Galatea, [15] but also for his apparent reluctance to bolster Free Skye's forces by hiring mercenaries during the Second Rebellion. [1]