Exploration and colonization of the Kerensky Cluster began by the Star League-in-Exile under Aleksandr Kerensky in 2793. The first and best of these early colonies was Strana Mechty, a world more promising than any of the five Pentagon worlds. By the end of the first year of colonization, the Star League-in-Exile had three nascent colonies. By the end of 2795, five worlds had been colonized. By 2800, 23 worlds had been identified, 13 had stable colonies with rapidly expanding infrastructure, 7 had just been settled, and another 3 were being prepared for colonization.[1]

The Kerensky Cluster became the home of Nicholas Kerensky's Star League-in-Exile after the Second Exodus in 2802.[2] When Kerensky announced the formation of the Clans on 11 June 2807, there were 20 established colonies within the Kerensky Cluster.[3] Terra-sciences surveys continued as the primary mission of the both the Star League-in-Exile, and later Clan, navy in the years before Operation SABLE SUN, identifying even more potential colonies.[4] However, most of these were settled after Operation KLONDIKE; by the start of KLONDIKE in 2821, the Kerensky Cluster contained 21 viable colonies.[5] Most of the remaining worlds were settled in the 2830s,[6] and nearly all by 2900[citation needed]. An additional system, named Colleen for Clan Blood Spirit founder Colleen Schmitt and containing two habitable worlds, Haven and Honor, was discovered just anti-spinward of the Kerensky Cluster by the CBS Coral Gulf in 3067.[7]

Compared to the worlds of the Inner Sphere, most of the Kerensky Cluster's planets are only marginally habitable or outright hostile towards human life, and often require Star League-era terraforming equipment to maintain habitability. Only two planets are self-sufficient, Vinton and York.[8]

The Kerensky Cluster remained isolated from the Inner Sphere until the appearance of the Outbound Light over Huntress in 3048. The latter event prompted an invasion of the Inner Sphere by the Clans, which in turn created a rift between Invading Clans and Home Clans. The result was the Wars of Reaving which saw many of the cluster's worlds abandoned or razed, and the Kerensky Cluster returning to isolation by 3075.

During a meeting of the Council of Six in 3087 a Clan Diamond Shark report spanning 17 years of data was the source of the last up to date info and status on the Cluster and those within it to the rest of human space outside of it.[citation needed]

As of 3151, the current status of the Kerensky Cluster and its inhabitants is completely unknown. 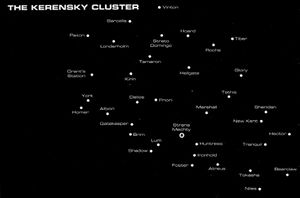 According to author Blaine Lee Pardoe in a blog posting, he created the first map of Clan space when he wrote the Wolf Clan Sourcebook (published in 1991). Regarding the names of various systems, he said that: