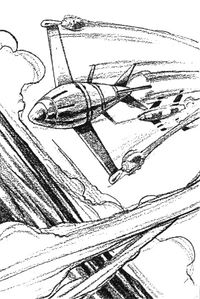 The Laser-Inhibiting (LI) Arrow Missile was an experimental defensive Arrow IV missile conceived by the New Avalon Institute of Science during the peak of the Clan Invasion. Upon impact the LI missile released a special chemical gas with intense prismatic qualities which not only obscured vision but diffused Laser beams passing through the cloud. Development of the LI missile began in 3052, with prototypes finished and limited production begun a year later, however the project was eventually shelved. In addition to problematic issues arising during the weapon's development and the scientists assigned to the project, LI Arrow missiles proved to be of limited utility. They had no effect on other weapon systems (including particle weapons), and while the gas rose higher into the air than conventional smoke artillery it also dispersed more quickly.[1][2]

In Classic BattleTech game rules, the LI Arrow Missile is delivered in the same fashion as conventional Arrow missiles but instead of causing damage it creates a gas cloud in the target hex and all surrounding hexes up to level 2 height. The cloud blocks visibility in the same way Light Smoke does and all Laser-based weaponry receives a -2 damage penalty for each hex of smoke it passes through. The smoke lasts for 2 rounds.[1][2]