The Legacy Grasshopper is an individual BattleMech whose history across three centuries of warfare is at the center of the Legacy anthology. According to the book's introduction, all stories within the book are depicting the same Grasshopper, at different points in time. 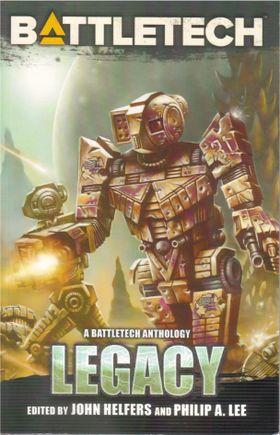 No single proper name for the 'Mech can be determined. Over time, it was given different names by different pilots including "Trash" (by Virgil Armstrong), "Survivor" (by Miles Shelley), and "Chances" (by Sigland Idleson).

The Legacy Grasshopper was prototype #5 of Lantren Corporation's GHR BattleMech design project. While working on the prototype 'Mech in March 2779, engineer Lucia Cavaletta had a breakthrough inspiration regarding a critical component (a fluidic actuator) that solved a design problem going forward. Context suggests her work on the fifth prototype essentially defined the later line production design, which went into production as the GHR-5H Grasshopper in the following year. In this sense, the Legacy Grasshopper can be regarded as the first Grasshopper ever built (being the first prototype to resemble the later line model), as the previous four prototypes were all different design iterations that were all flawed in some way.[1]

By July 2796 the Legacy Grasshopper was piloted by Tai-i Sam Tanaka of the 6th Sword of Light regiment, and as such took part in the Kentares Massacre. The repulsive war crime affected Tanaka to the point where he made a snap decision to hide a local girl in the Grasshopper's cockpit, despite realizing that he would be unable to save her life for more than a few days and still have to face the consequences, most likely court martial for treason.[2]

In April 2830 Cavaletta's hand-built fluidic actuator turned up on Le Blanc, allegedly salvaged "from an antique BattleMech used by the Draconis Combine's elite kamikaze warriors".[1] This suggests that Tanaka's Grasshopper—with or without Tanaka—was indeed later sent on one of the suicidal Chain Gang Missions, presumably because of what Tanaka did. It remains unclear if the special fluidic actuator was reunited with the Legacy Grasshopper by sheer coincidence (it was going to be used in refurbishing a Grasshopper that may or may not have been the Legacy Grasshopper), or if it had a separate history from this point onward.

By 2840 it served with the Capellan Cuirassiers, where its unique workmanship piqued the interest of the technical staff. Realizing that it may be one of the first Grasshoppers ever built, Lantren Corporation offered a full factory overhaul in return for a chance to analyze how the machine had fared over sixty years of near-continual warfare, but frequent combat missions (and the resulting damage) delayed shipment until after the destruction of the Lantren Corporation factory in 2843, rendering the offer moot.[3]

Its fate over the next 130 years is undocumented.

In 2973 the Legacy Grasshopper was found in the wreckage of a downed DropShip hidden under the desert sand on Kesai IV, and subsequently adopted into the Witchwood Warriors mercenary unit (who were just raiding the planet) with its inexperienced finder.[4]

On 25 February 3005 the Legacy Grasshopper was piloted by Leutnant Christiane Kühn of the 17th Arcturan Guards as they were attacking Kalidasa in the Free Worlds League. A laser hit to the head killed Lt. Kühn and partially melted the headrest. The defending Silver Hawks Coalition forces salvaged the 'Mech at the local Kali-Yama factory annex and assigned it to Sergeant Virgil "Verge" Armstrong of Panther Assault Group. It was downed and Armstrong wounded in battle on 1 March, but he had grown fond of the 'Mech, having named it "Trash", and decided to repair and keep it.[5]

It was apparently reclaimed by Lyran Commonwealth forces later as combat salvage prior to or during the Fourth Succession War. After spending a decade in a salvage yard on Hesperus II it was refurbished and upgraded with prototype cutting-edge technology lasers, and assigned to Hauptmann Miles Shelley in late 3038 when he was given command of the Third Lyran Guards RCT's Lightning Company. Shelley put it to good use in the War of 3039 during heavy city fighting on Vega.[6]

Within the Third Lyran Guards the Grasshopper would later be assigned to Sigland Idleson, and she took it with her following a dishonorable discharge. By 3049 Idleson was in command of the Idle Hands mercenary lance. After abandoning her lance to die in a botched raid, she retired to Erewhon with the 'Mech to settle down as a farmer. Shortly afterwards the planet was overrun by Clan Jade Falcon, who captured her, made her a bondsman in the technician caste, and assigned her to one merchant captain Mattox. Idleson convinced Mattox to release her back to her farm and husband on Erewhon in return for her help in some shady but profitable projects, one of which implicitly included selling the Grasshopper in the Inner Sphere.[7]

The Legacy Grasshopper's next owner was the (unnamed) aunt of Hauptmann Philip Giacomo, who purchased it from "a discreet merchant". She passed on the Jade Falcon front and bequeathed the 'Mech to Giacomo's niece, who was still attending Nagelring Academy, yet entrusted it to Giacomo in the meantime, stating she trusted him to maintain it more than a storage facility. When Katherine Steiner-Davion usurped the Federated Commonwealth and recalled Lyran units into the Lyran Alliance in 3057, Philip Giacomo (and the Grasshopper with him) was among the FedCom defenders who decided to remain behind on their posting world of Tsingtao and wage a guerrilla war against the Capellan Confederation, who was quick to reclaim the world, in 3058.[8]

The cover image of the Legacy anthology book was reused from Mercenaries Supplemental II. The Grasshopper depicted there is shown in combat bearing the insignia of Burton's Brigade, a mercenary unit that was formed in 3057. If it is assumed to be the Legacy Grasshopper, this would be a scene after the 3058 operation on Tsingtao and prior to the demise of Burton's Brigade in 3067; during this time, the unit fought on Hall for Count Radcliffe McNally and later his estate, in Elly Burton's ultimately ill-fated war against William Baranov.

Partaking in Task Force Serpent as part of MacLeod's Regiment of the Northwind Highlanders, the Legacy Grasshopper saw combat against Clan Smoke Jaguar ProtoMechs on Huntress in 3060.[9] The 'Mech fought in the initial assault on Pahn, and against the Smoke Jaguar counterattack to the factory where he encountered and defeated the last known active Jaguar ProtoMech, a Roc piloted by one Ean.

Around this time, Barr Benfico served as its tech. At one point, a faulty hydraulics seal gave out in the middle of a firefight; the Grasshopper went down hard and the battle took a turn for the worse, with several other 'Mechs downed and people killed. No time, place or further context was given for this battle. Barr Benfico was subsequently cashiered. Back in the Inner Sphere by 3063, the (unnamed) pilot went rogue in the FedCom Civil War on Newtown Square and began to wage a private war against both sides. Barr Benfico, now a professional scavenger who had not seen the Legacy Grasshopper for some years, recognized it the during a battlefield encounter, helped the pilot (a young woman) out of a dangerous situation, but suffered fatal injuries shortly afterwards.[10]

By 12 March 3078 the Legacy Grasshopper, having been claimed as salvage and refurbished once again, was piloted by Tai-i Shintaro Gustavson of the Seventeenth Benjamin Regulars. Despite the refit, it was described as a wreck from centuries of rebuilds, jury-rigged repairs and bypasses. It was deployed in the recapture of Bryant from the Word of Blake.[11] Immediately after the conclusion of the Bryant battle, it was part of a shipment of supplies from Combine forces to Stone's Lament on Terra, and on 1 September 3078 was assigned to Nathan Trivedi of Third Battalion, as a replacement for his lost Victor. A doctoral candidate in history, working on a thesis about military technology, Trivedi was intrigued by the ancient 'Mech (which he realized must be one of the very first Grasshoppers ever built), and by the thirty or so names of previous pilots etched into a cockpit bulkhead. He piloted the Grasshopper in the final battles on Terra, and was pivotal in the destruction of at least one Omega. Afterwards, Trivedi suggested the heavily damaged 'Mech should not be repaired, but be put in a museum instead.[12]

The Legacy Grasshopper was decommissioned in 3083 as part of Devlin Stone's Military Materiel Redemption Program, and scrapped; only its bulkhead with the names of pilots and other dates inscribed was kept in the Bovington Tank and BattleMech Museum in London, Terra. Lucia Cavaletta's fluidic actuator, meanwhile, continued to serve as a component on an AgroMech on Bryant past 3090.[13]