When WizKids launched the MechWarrior: Dark Age (MWDA) Clix game in 2003, they also dedicated a subsection of their web presence to the game, presenting it as an outlet for news and messages within the BattleTech universe (see Content below).

LinkNet was an in-character subsection on the last incarnation of the now defunct real-world WizKids website. Following the discontinuation of the MWDA game in 2008, the website was taken off-line in 2010.

In a broader sense, "LinkNet" is a summary reference among the fan community for BattleTech and MWDA that also covers the preceding incarnations (or skins) of the MWDA subsection of the WizKids website.

The MWDA website underwent changes as the game's storyline progressed:

In-universe date: June 3132 – 9 March 3134
The site was styled as INN, a news site based on Towne that offered a primer on the new Republic of the Sphere and a Republic Atlas, as well as Touring the Stars articles and ComStar newsfeeds. After the Blackout (on 7 August 3132) it only provided local news.

In-universe date: Jan – Dec 3135
During this time, the website offered the PDA journals of Evan Kaiple and Deandra Lowe as-is, without any in-universe context. 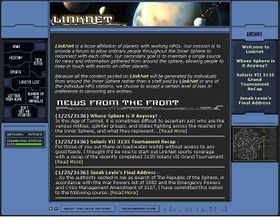 In-universe date: Jan – Aug 3136
The in-universe LinkNet was a network formed by a handful of still-functional HPGs in the wake of the Blackout, to keep each other informed and maintain HPG communication as much as circumstances allowed.

Like MWDA in general, the MWDA website was considered part of the greater BattleTech universe and its in-character content is considered fully canonical, albeit subject to the usual possibilities for in-character resources to be in error due to oversight, bias, or outright misinformation.

Since much of the content published via the MWDA website was not published elsewhere, steps were undertaken to preserve it. Catalyst Game Labs and volunteers compiled some of the information into a number of files that CGL subsequently offered for free download via their website; these files are copyrighted to Topps with a 2012 timestamp:

Starting in September 2002, official scenarios for events and organized play arranged by Wizkids became available from their website to support the MWDA game and its ongoing timeline and evolution. These included: