This article is about the system. For the BattleMech, see Marshal.

Marshall is a system and planet in the center of the Kerensky Cluster region of Clan space.[12]

Marshall was colonized by the Clans by the 29th century. Its Terran-like atmosphere and ecology made it a popular site for colonization, leading to a number of Clans holding territory on the world. Majority of the colonized lands had gone to Clan Goliath Scorpions and Steel Vipers, fifth of the planet going to the Clan Star Adder. The remaining Clans had settled for small remaining portions of the planet. With dense population between rival Clans, this lead to number of inter-Clan conflicts for resources.[13]

In 2844, Clan Mongoose assaulted Star Adder's Marshall enclave. Star Colonel Miguel Riley and his Cluster of Mongoose warriors would conduct a campaign of scorched earth, destroying every bit of infrastructure they happened across. After the last garrison units fell to the invaders, the Star Adder civilians took up arms against the Mongoose warriors to protect their homes. Angered by this act of resistance from nonwarrior castes, the Mongoose commander ordered his troops to kill every colonist. Outraged by this act, the Star Adders' saKhan Dembe N'Buta tracked the Cluster to the Mongoose enclave on Tokasha. There he and the Quasar Keshik attacked with fury, killing or capturing all of the Mongoose warriors involved in this unClan-like act of aggression. He then claimed the colony and its entire population, before having them transported back to Marshall to repopulate their colony with the former Mongoose civilians.[14][15]

in 2875, Clan Jade Falcon defeated Clan Fire Mandrill in a Trial of Possession for a factory on Marshall, which also led to the Howler forming a large segment of their second-line forces.

In 3050, Clan Ice Hellion targeted the only Clan Snow Raven enclave on Marshall. They landed, but the Ravens aerospace superiority inflicted massive losses on the Hellion unit. Despite this the Hellions were able to take the research station and eliminate the only holding the Ravens had on the world.[16]

Around 3059, Clan Jade Falcon challenged Clan Ice Hellion for their enclave on Marshall. The Second Falcon Velites faced off against the Seventh Hector Cavaliers. The Cavaliers were initially pinned down by the Velites in a canyon of the Firth mountain range, until a Binary of Snow Foxes striking at the Falcon rear created the impression of a larger force at their back. The resultant confusion allowed the Cavaliers to turn the Falcon flank and win the Trial.[17]

As of 3062, six different Clans each had enclaves on Marshall, leading to frequent and numerous Trials.[18] Civilians on the planet, so used to their enclaves changing hand, have their paperwork set up to have their Clan logos changeable for typical results of a trial.[19]

In 3067, Clan Star Adder began their offensives with Trials of Possession for Wolf holdings on Hoard, Steel Viper holdings on Homer, and Jade Falcon holdings on Marshall.[4]

Marshall stayed in equilibrium as its six Clans continued mostly undisturbed for over another year. Late in 3068, Clan Steel Viper commissioned Omicron Galaxy, mixing ProtoMechs, BattleMechs, battle armor, and aerospace fighters, as a force designed to appear more formidable than it actually was, but sufficiently capable for head hunting, reconnaissance, and other complex missions. These Clusters could be bid away to reduce an opposing unit's strength, or fielded to catch an adversary unaware.[5][6]

However, the 2nd Falcon Velites returned later in 3069 and issued another batchall, this time for the entire Steel Viper enclave on Marshall. Galaxy Commander bid the Viper Fusiliers in defense of the Clan's holdings. Though the Vipers appeared to have the advantage, especially after Star Colonel Allen Dumont killed the Velites' Star Colonel Dien, the Falcons broke their bid and decimated the surviving Vipers with an artillery strike. The surviving Steel Viper forces, barely a Trinary of OmniMechs and battle armor, were offered hegira or Annihilation. The Vipers lifted off world, conceding their holdings to Clan Jade Falcon.[5][6]

On 5 November 3069, the matter of the Falcon tactics was brought before the Clan Grand Council, but with the added allegation that contact with the Inner Sphere had tainted Clan Jade Falcon. The Council did not vote successfully to censure, Annihilate, or Absorb the Jade Falcons, leading Clan Steel Viper to retaliate on its own. 36 hours later, Clan Steel Viper jumped into almost every Jade Falcon colony system, including Barcella, Eden, Gatekeeper, Glory, Huntress, Ironhold, Marshall, and Tokasha. On Marshall, the 2nd Falcon Velites faced all of Beta Galaxy without batchall or zellbrigen. The Cluster was Annihilated to the last Warrior.[20][7][8]

In the aftermath of Clan Wolf's Omicron Galaxy's December 3071 raid on The Founders' Blood Temple, a short period of unrest engulfed most of Clan space. Homeworld Clans, led by ilKhan Brett Andrews of Clan Steel Viper, whose Clan had been expelled from the Inner Sphere several years earlier, began targeting Clans with an active Inner Sphere realm or occupation zone. While not all Homeworld Clans conducted these actions — Clans Coyote and Goliath Scorpion largely refrained — those that did resorted to a combination of wanton violence, raids, Trials of Reaving, and Trials of Abjuration, all either condoned or directly sanctioned by ilKhan Andrews. The targets of these Trials were not only the Warriors of Invading Clans, but often lower castes, too. Andrews also ordered the destruction of the Homeworlds' Deep Space HPGs in order to prevent news of the targeted Trials reaching the Inner Sphere.[21]

Displeased with recent events, Clan Coyote had been posting Clusters to several colonies, including Marshall and Grants Station, in preparation for massive new offensives as early as August 3071.[9] In response to this escalation of violence, Clan Coyote called a Clan Council with its Scientist Caste present.[22] Clan Coyote had been heavily influenced by its Scientist Caste, possibly since the aftermath of Operation: KLONDIKE[23]. Unknown to most Clans, the emboldened Scientist Caste had become the strongest element in a heretofore unknown faction called "The Society".[24] Shocked by the Abjuration of Clan Wolf and the violence inflicted upon the lower castes, Clan Coyote's Warriors and its Scientist Caste decided to mobilize, to begin in early 3072.[25] The Society deployed new, technologically sophisticated weapons, but their involvement was not limited to military deployment. Society operatives apparently caused a widespread HPG blackout beginning in February, JumpShip drive failures and misjumps, targeted Annihilations, deployment of weaponized viruses, and a propaganda campaign urging a lower caste revolt on Strana Mechty.[26]

Each Clan faced different threats. Clan Coyote, Dark Caste, and Society forces overwhelmingly targeted Clan Steel Viper targets on Marshall in early 3072, largely ignoring Clans Goliath Scorpion and Fire Mandrill. Clan Coyote then redeployed their Clusters, moving elements of Epsilon Galaxy to Babylon, abandoning the planet to the Dark Caste and Society.[10] Clan Star Adder lost all communication around this time.[27][28] In response to Dark Caste losses Clan Goliath Scorpion quietly withdrew its forces from Marshall.[29] Clan Ice Hellion's Marshall enclave was penetrated by the Dark Caste and The Society, but maintained the appearance of an Ice Hellion enclave, though they ceased contact with their Clan. Without word from Marshall (or, for that matter, almost any of their colonies), Ice Hellion leadership decided to abandon their Possessions and fortify Hector. Clan Fire Mandrill's enclave was apparently largely ignored, leaving the 301st Firebrand Cluster at nearly full strength. However, when the 301st deployed and attempted Trials of Possession for the former Ice Hellion cities of Immesha and Ommesha in early December 3072, Dark Caste Septs defeated the Mandrills, taking them as bondsmen. The Dark Caste then took the remaining Fire Mandrill enclaves. All bondsmen were allowed to join the Dark Caste; their near-universal refusal sealed their fate, and all Trueborn Fire Mandrills were given to the Society for experimental testing.[30]

Finished with Marshall by early 3073, the surface of the planet was bombarded from orbit by the Dark Caste. Most production complexes on the planet, including the largest Fusion Engine factory in Clan Space, were destroyed. The Bombardment also caused the collapse of the ecosystem, resulting in widespread crop failures. The surviving lower caste inhabitants of Marshall, primarily former Ice Hellions, were left to starve. Several months later in June 3073, ilKhan Brett Andrews Steel Viper discovered the fate of Marshall while leading a relief task force. He also discovered and rescued a small Steel Viper enclave that was discovered intact. The remaining survivors were left to fend for themselves.[31]

Marshall is composed of six continents, though two are mostly covered by the polar ice caps. Though the planet is similar to Terra in some ways, much of the land is wasteland.[18] Because of this, the population was squeezed into several quarters, while a few dedicated areas serve as dueling grounds. The planet is noted for being similar to Terra when it was in its early stages of development.

The Marshall system had a gas giant named Xian; its moon, Diamondstar, had an ecosystem with a breathable atmosphere and scrub flora. The moon had been in possession of the Steel Vipers until 3042. Clan Jade Falcon claimed it for themselves, after years of scientists studying the moon's lifeforms and having a keen interest in its mineral wealth.[18] 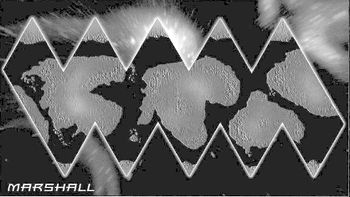