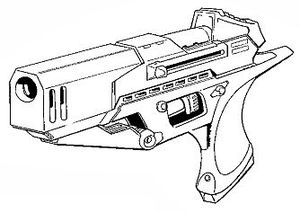 The Martial Eagle Machine Pistol is part of the Eagle series of pistols, including the Hawk Eagle Auto-Pistol, produced by Irian PersArms for the Free Worlds League. Like the Hawk Eagle, this machine pistol uses expensive caseless ammunition to prevent stoppages and can fire in either semi-auto or ten-round bursts. Compared to similar machine pistols, the Martial Eagle fires smaller-caliber bullets at lower velocities, resulting in less armor penetration, but has a higher rate of fire and greater reach. While line troops appreciate the Martial Eagle's compact design, its inability to accept silencers or recoil compensators has limited its adoption by special-forces groups such as SAFE.[1]