MechForce News was the quarterly newsletter of the MechForce North America fan club, produced by FASA. Each issue summarized recent events in the BattleTech fiction line from an in-universe perspective and had a section that listed members rankings.

AWOL Productions took over running the MechForce North America from 1990 onward, and the publication changed its name to 'Mech (magazine).

The MechForce News was an official product, produced under FASA's direct aegis. However, the current definition of Canon for BattleTech expressly excludes magazines (even "official" ones) by default. The magazine's content must therefore be considered apocryphal unless confirmed in a recognized canonical publication or ruling.

No volumes are given for the early issues. After the time-jump to the Clan Invasion era, a note of "Volume XXI" appears in the header, and references are made to having been in publication for 20 years. 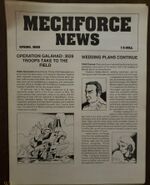 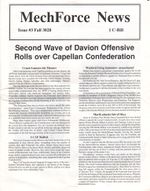 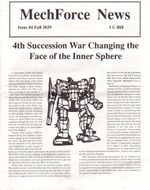 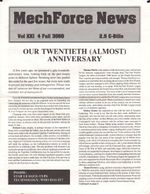 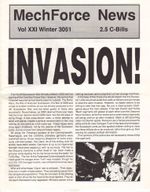 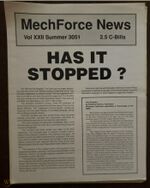