Micropose's MechWarrior 3 is a 1999 computer game set in the BattleTech universe.

Computer games are explicitly excluded from the list of products that contribute straight Canon to the BattleTech universe while at the same time it was stated that the IP owners are "not in total denial about these sources either"; it has also been stated that fluff from certain official, licensed products (namely certain computer games including those produced by Microprose) can be assumed to be part of the shared universe as long as it is not directly contradicted, and makes sense. On this premise, MechWarrior 3 is considered to be an apocryphal product. However, it is quite possible that this doesn't relate to Trial Under Fire, the game's novelization.

The operations BULLDOG and SERPENT are concluded, meaning Clan Smoke Jaguar is no more. The Star League Defense Force is gathering, to finally bring the true horrors of war to the Clans themselves and teach them how war is played in the Inner Sphere. The forces are jumping to Strana Mechty to conduct the Great Refusal that will bring peace to the galaxy at last.

However, there are some remaining tasks left according the Jaguars: their last high-ranking officer, Galaxy Commander Brendon Corbett, is hiding on a secluded, remote planet named Tranquil where he's gathering all the remaining Jaguar forces to give a nasty surprise to the Inner Sphere.

Two DropShips are detached from the Eridani Light Horse crew named Eclipse and Black Hammer. These are to find all remaining Jaguar forces on Tranquil and put an end to this threat. This little force made up by the two ships is called Damocles Commando. Their task is to destroy all 'Mech production facilities, all ammunition and food plants and hinder any ways the planet could be used as a military base. Eliminating Jaguar forces is a bonus, but isn't necessary, since this is first of all a commando operation.

The crew of the two DropShips are assigned to two different task groups, who assume the Jaguars do not have significant forces to fight with, and that they're totally unaware of the upcoming attack.

The DropShips are closing in on the planet as the Black Hammer suddenly disappears in an explosion, caused by a naval laser stationed on the planet, showing that the Jaguars may be unaware, but they are far from unprepared.

The 'Mechs that should have been deployed from the ships are scattered or destroyed so the player needs to start the game on his own, without his lancemates and any help. As the player advances through the game, the support crew that is residing in three MFBs are working well and gather the surviving 'Mechs slowly. 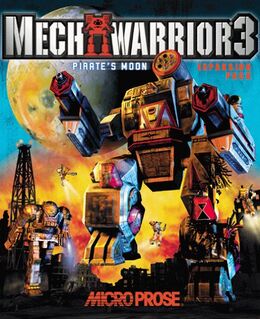 After the elimination of the last known Jaguars on Tranquil, Sinclair is been promoted to colonel, and reassigned to a remote mining colony: Veil. There's nothing on the planet but one thing: germanium. This mineral is vital to the Inner Sphere, and there are numerous mining facilities scattered on the planet, some handled by the Lyran Alliance, some by the Davions, and some by the Rim Collective. Everything is fine until some bases report cumulative pirate attacks, so Colonel Sinclair is assigned to the task: eliminate all pirate activity.

The player can select two different campaigns: The Eridani Light Horse that tries to purge the pirates from Veil, or the pirates that try to acquire rule over the planet and, more importantly, over the germanium. The Eridani Light Horse campaign is a coherent line that points to the last battle with three pirate bases simultaneously, but the pirate missions are separate ones that relate only loosely with each other. After both party is finished, the player gets a bonus mission, for fun, where he can meet Susie "One Eye" Ryan face to face.

Following their return to the Inner Sphere and some R&R, Lt. Connor Sinclair, Epona Rhi, Dominic "Gunner" Paine, and Allen Mattila are assigned to provide security for germanium mining operations at the Madre crater on the Periphery mining outpost of Veil, which is being jointly exploited by the Veil Mining Coalition, an alliance of crews from the Federated Suns, Lyran Alliance, and Rim Collection (referred to throughout as the Rim Collective). Sinclair's lance is based at Corona Base, which is manned by personnel loyal to Victor Steiner-Davion.

The New Belt Pirates have come to Veil to obtain valuable supplies of germanium, and were most displeased when Rim Collection and Federated Suns miners arrived for the same purpose. Susie "One Eye" Morgraine-Ryan's right hand man, Scourge, leads Deuce, Trey and Blaze in missions to defend Belter bases and strike at Federated Suns and Rim Collection facilities.

The bonus mission becomes available when both Damocles and Pirate campaigns have been completed. Lt. Connor Sinclair has apparently been kidnapped by the Belters and stranded on an island in a fight to the death for the amusement of New Belt Pirate co-leader Susie Ryan. The player, as Connor, can configure an assault 'Mech of their choice, and begins on an island with no way off. They must face and defeat seven enemies to win the scenario. The final two opponents are Scourge and Suzie "One Eye" Ryan. (Transcript)

The Elemental battle armor also appears, but the player cannot control it. However, it can be controlled in the expansion pack "Pirates Moon"