Battledroids was publishedby FASA in 1984. In its 1985 catalog, Ral Partha introduced a line of eight figures for Battledroids. These models did not correspond to the ten mechs (Stinger, Griffin, Archer, Shadow Hawk, Warhammer, Phoenix Hawk, Wasp, Crusader, Marauder, and Rifleman) described in the Battledroids rulebook. None of these formally correspond to the mechs in Technical Readout: 3025 that appeared in 1987. So these were independent creations not based on any canonical mechs/variants. Many of their names, but not their likeness or model codes, would be used by mechs in later technical readouts. These original eight figures would continue to be marketed for a few years, but were gradually discontinued and by 1989 were fully absent from Ral Partha's catalog. 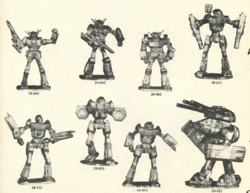 With the change in name, BattleTech, Second Edition was published in 1985. In its 1986 catalog, Ral Partha marketed these original eight figures and several new figures under the BattleTech name (with a lower case `t'). The new figures included three more figures that with no initial canonical correspondent plus figures for the classic fourteen mechs of BattleTech, Second Edition. All of these figures were sculpted by Bob Charrette.

The FIR-7B Fire Bee, FLE-15 Flea, and ARC-4R Archer appear in the 1986 catalog, but were not identified as new releases. These three appear to have been formed in manner similar to the original eight an likewise did not correspond to a canonical mech existing at that time. The Fire Bee had a form similar to the Stinger and Wasp mechs. It met an early discontinuation similar to the original eight. In contrast, the FLE-15 would continue to be produced by Ral Partha for many more years and its appearance is similar to the mech that would later appear in canon. The ARC-4R appears to have been renamed as the BMB-12D Bombardier between 1990 and 1991. (As the FLE-15 Flea and ARC-4R Archer figures would become integrated into Ral Partha's BattleTech line, information these are included in the table of BattleTech figures rather while the Fire Bee is included in the table of Battledroids figures.)

The first eleven figures and some of the classic fourteen (the Wasp, Phoenix Hawk, and Crusader, among possible others) were initially packaged in red Battledroid blister packs.

In 1985, BattleTech 2nd edition was published and the name converted from Battledroids to BattleTech. CityTech 1st edition and Technical Readout: 3025 were both published in 1986.

From 1986 to 1993 Ral Partha dramatically grew its line of 'Mechs, vehicles, aerospace fighters, and infantry. Apart from discontinuing the Mechs originally part of the Battledroids line, no other miniatures were discontinued prior to 1993. Clan units appeared to be produced by Ral Partha in 1990 and 1991. Technical Readout: 3050 was published in 1990.

From 1988 to 1993, Ral Partha marketed a line of BattleTech MechWarriors along with its BattleTech line. This appears to relate to MechWarrior: The BattleTech Role Playing Game, which was published in 1986. The miniatures involve infantry and human units. These also use a larger scale than the infantry used for regular BattleTech. The Clan elemental would continue being marketed individually even when the rest of line was stopped in 1993.

Ral Partha used the range of catalog codes from 10-800 to 10-899 for BattleTech box sets. The composition of some of the lance packs did vary depending of the year of manufacture.

Ral Partha introduced six in 1988 plus two more in 1989. Each of these packs bundled together a certain collection of four mechs (not necessarily all distinct). These eight were the Recon Lance, Light Lance, Medium Lance, Fire Lance, Heavy Lance, Assault Lance, Regimental Command Lance, and Pursuit Lance.

Ral Partha used a lead alloy containing 80% lead in its miniatures prior to 1993. In 1993 Ral Partha announced that it would transition away from lead alloy and replace such with Ralidium, its own formulated pewter. Ralidum is 95% tin and 5% zinc and antimony (in some proportion), with at most trace portions of lead. Ralidum is harder (and so somewhat more brittle) in comparison to the lead alloy it replaced, making it more challenging to modify figures cast in it. It also cost three times of much which lead of price increases for many of Ral Partha's figures.[1] Ral Partha also introduced Partha Plastic, a type of resin, to be used in part or in whole for certain miniatures.

BattleTech miniatures advertised in the 1993 catalog (released in March 1993) were described as containing lead, while none of Ral Partha's BattleTech figures in its 1994 catalog used lead alloy. The same catalog numbers were used to represent the corresponding figure created from pewter. However, figures incorporating some amount of Partha Plastic were distinguished by the use of suffix P in their catalog code. Certain boxed sets used a combination of Partha Plastic and Ralidium for a few years, but the usage of Partha Plastic appears to have been limited to these few cases.

From 1993 to 2000, Ral Partha continued to introduce new miniatures, but discontinued the advertising (and likely sale) of several models as well. Ral Partha discontinued much of its MechWarrior figures at the time of its transition from lead to pewter. Certain models tied to the Unseen issue were discontinued starting around 1996.

Several changes affected Ral Partha in this period. Ral Partha was jointly purchased by FASA and by Lanier and Mike Hurdle in September 1998. FASA obtained sole ownership in spring 1999.[2] FASA closed its own operations early in 2001.

Ral Partha promoted its website in its 1996 catalog as a source for updates. 1997 marked the last year of Ral Partha's catalog being released on an annual schedule. A catalog would be released for Winter 1998/1999. A Ral Partha catalog was also released in 2000. Iron Wind Metals produced its first (and possibly only) catalog in 2003. Iron Wind Metals has put information about its available miniatures and releases on its website as well as developing an online store.

In the period from 1998 to 2000, a substantial wave of figures were discontinued. Several previously used catalog numbers were then reused for new figures. Also some figures appeared having the same name as former models but under new catalog codes. It is unclear whether these involved new sculpts or were simply reintroduction of prior sculpts.

Detailed lists of miniatures, subdivided into various groups, are supplied below.

General Table Notes: "Catalog Number" denotes the figure's catalog number as used by Ral Partha. (Ral Partha did at times reuse catalog numbers from discontinued figures for new figures. Also Ral Partha may have adjusted or reworked some of its figures without any special announcement. So the figure and its packaging depends not solely on the catalog number but also on its year of production.)

"Model" denotes the corresponding in-universe model code of the unit the figure represents (if applicable).

"Name" denotes the name of the figure or set.

"Sculptor" denotes the sculptor of the figure(s).

"Manufacturer" denotes the manufacturer of the figure.

"Year" represents the first year the miniature appeared in one of the Ral Partha Catalogs or the first year of sale implied by a catalog entry. If a year is given in parentheses, it is the last year the miniature appeared in a Ral Partha catalog of the last year of sale implied by a catalog entry. [Catalogs were generally published once a year. So precise release years or corresponding years of sale could vary slightly from those stated below.] Information from archived retailer websites from 2000 and later has been used to help identify release years for those appearing in the 2003 Iron Wind Metals catalog but not appearing in the 2000 Ral Partha catalog.

"Material" denotes the material used to produce the figure. (If marked "Depends on Year", then the material would depend on the year of manufacture. Ral Partha converted from a lead alloy to a lead-free pewter in the time period between its 1993 and 1994 catalogs.)

This table reports the original eight figures Ral Partha adverstised for Battledroids in its 1985 catalog plus the FIR-7B Fire Bee. The FIR-7B Fire Bee was released prior to the 1986 catalog and possesses character that makes its suitable to group it with these eight.

This table reports the figures Ral Partha produced for BattleTech from 1986 to just prior to conversion to Iron Wind Metals in 2001. The units represented include mechs, infantry, vehicles, aerospace units, and protomechs.

This table reports the figures Ral Partha produced for MechWarrior: The BattleTech Role Playing Game, which was published in 1986. These use a larger scale, with the Clan elemental specifically identified as using 25mm scale in 2000. Apart from the Clan elemental, production of these was discontinued prior to Ral Partha's conversion from lead alloy to lead-free pewter.

In 2000, Ral Partha introduced some miniatures having museum scale, which are reported in the table below.

This table reports the lance packs and boxed sets produced by Ral Partha.

Ral Partha also sold blister packs of various spare parts. These were not reported in any of the Ral Partha catalogs. Given that their catalog codes were used for specific units starting in 1998, it appears that these were produced in some years prior to 1998. Images of these packs can be found at Lost Minis Wiki.