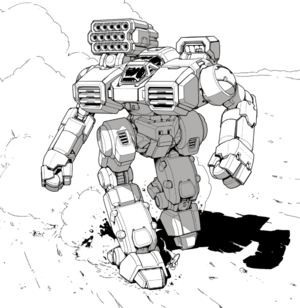 Missile Boat is a battlefield role performed by certain models of 'Mechs, as well as other ground units. They are primarily armed with indirect fire weapons, such as long-range missiles.[1][2]

Missile boats are identified by their function as providers of heavy, long-range fire support, whereby they attack the enemy from a protective distance with indirect fire. In order to either protect the missile boat or take full advantage of its mission, skirmishers and strikers generally close with the targeted enemy units, while the fire-support launches from behind full cover, such as a hill. Generally comprised of BattleMechs or heavy combat vehicles, they tend to operate on their own or with defensive support nearby, in order to avoid close-quarters fighting. They are functionally similar to the sniper role, though with the primary armament being indirect.[3][1][2]

In Alpha Strike, a unit is identified as a Missile Boat when it meets the following standards[3]:
Speed: Any
Armor: Any
Range: Long
Special: LRMs, indirect, or artillery