Morgan Finn Kell was the cofounder of the Kell Hounds mercenary unit along with his younger brother, Patrick Kell. He also held the title of Grand Duke of Arc-Royal.[5]

Morgan would graduate from the Nagelring academy in 3004 after attaining stunning marks.[6]

After graduation, Morgan deferred his service in the LCAF for a year in favor of touring the Commonwealth with his cousin, the powerful Duke of Donegal, Arthur Luvon. LCAF officials hoped Morgan would return from this excursion a more mature and seasoned soldier.[7]

In 3004, Morgan, Arthur and Arthur's future wife Katrina Steiner were attacked by LIC and Loki on Poulsbo. Archon Alessandro Steiner had sent forces to assassinate Katrina due to her opposition to his Operation Concentrated Weakness. Members of the loyal opposition force, Heimdall, saved them and allowed them to flee to the Periphery. As a cover, they took on the personae of the Red Corsair and her henchmen. Acting as undisclosed pirates through the Periphery, they reentered the Inner Sphere through the Free Worlds League's border. Leading to Katrina's return to Tharkad and helping her to "retire" Alessandro.[8] During this time Morgan met a woman named "Tempest", who is believed to be his first love.[9]

Following Alessandro's resignation, Morgan returned to the LCAF. He was assigned to the 10th Skye Rangers, where he served for three years. In August 3010, he resigned his commission to form a new mercenary unit with his brother.[7]

The Kell Hounds were born even before Morgan and Patrick had thoughts of running their own mercenary command. Arthur Luvon, future husband of Lyran Archon Katrina Steiner and Morgan and Patrick's cousin, dubbed the two brothers the Kell Hounds after witnessing them as young boys running around and terrorizing a neighbor's flock of sheep. Arthur drew up the Kell Hounds' crest and predicted that the two would grow up to become great MechWarriors. When Arthur died, Morgan and Patrick used the money left to them to form the Kell Hounds mercenary unit, which they created in 3010. Though initially mocked as rich boys playing mercenary, the two made quite the impression with their surprisingly advanced grasp of strategy and tactics, as well as a top-notch technical support staff.

In a battle on Mallory's World in 3016, Morgan saved his unit by using the Phantom 'Mech skill in single combat against the commander of the 2nd Sword of Light, Yorinaga Kurita.

After that incident, Morgan reduced the Kell Hounds to a single battalion and went to a MechWarrior monastery, the St. Marinus House on the planet Zaniah. Eleven years later, following the death of Patrick Kell at the hands of Yorinaga Kurita, he rebuilt the Kell Hounds into a full regiment to defeat Kurita. He traveled to Tharkad at New Year's Eve of 3027 to ask Archon Katrina Steiner to release the unit's contract so he could pursue Yorinaga. He was asked by Melissa Steiner to give her away in place of her father.[10] As his unit rebuilt and trained he and Captain Daniel Allard traveled to Terra for his cousin's wedding in August 3028. In the course of the events of the wedding, he briefly allied with Wolf's Dragoons commander Jaime Wolf and archenemy Yorinaga Kurita to rescue Yorinaga's son after he discovered hidden Star League era BattleMechs under ComStar's compound on Hilton Head Island.[11]

By January 3029 Morgan had his forces destroy the Genyosha's base on Nashira[12] and create a makeshift map out of the ruins of the base to direct the Genyosha to a world on which to meet. 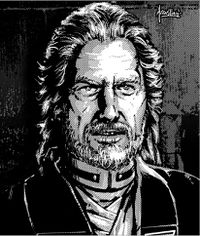 During the Clan invasion he received word of the loss of his son Phelan to what was later discovered to be Clan Wolf on The Rock in 3049. Near the end of the war he led the Kell Hounds on Luthien alongside Wolf's Dragoons against the Smoke Jaguars and Nova Cats.

On June 19th, 3055 Morgan was caught in an explosion which killed his cousin Archon Melissa Steiner and his wife, Salome. The explosion also tore his right arm off, requiring him to wear a bionic replacement prosthetic, but he seldom wore the device, because he disliked it. He learned later that his cousin's daughter Katherine Steiner had arranged for the assassination of her mother to make way for her ascension as the new Archon. As he gathered evidence he also began to isolate his patrol region along the Lyran-Clan border, beginning what he later called the Arc-Royal Defense Cordon.

After the Refusal War between the Wolves and Falcons he created the Arc-Royal Defense Cordon on the border area with Clan Jade Falcon. During this time, the Cordon was technically part of the Lyran Commonwealth, but was, for all intents and purposes, under the authority of the Kell Hounds. His son, Phelan Kell, later relocated to Arc-Royal with the remaining Warden Wolves as Clan Wolf-in-Exile. Notable units in the Cordon were the 4th Skye Rangers, 17th Skye Rangers, the entire Clan Wolf-in-Exile touman, The Blue Star Irregulars, the Dioscuri, and the Kell Hounds.

During the 3058 First Whitting Conference there was parliamentary debate about Kell's standing to be present for political discussions on the Star League's creation. In order to proceed with the agenda, Candace Liao proposed marriage to Morgan, bestowed upon him the world of Warlock, the title of Prefect of Warlock, and named him a Peer of the Realm. While the proposal was never deemed serious, a closer relationship between the two eventually developed.[13][14][15][16]

In 3059, Kell met with his cousin Victor Steiner-Davion, and secretly gave him the support of his forces should they ever be needed to retake his place as Archon-Prince of a reunited FedCom. While on Tharkad during the Whitting Conference, he had a private meeting with Katherine/Katrina Steiner-Davion and his son Phelen Kell. The meeting started amicably at first, where she tried to court him to her side. He soundly refused, stating boldly that he knew she had ordered the murder of her mother, which led to his wife's death. In a fit of rage, she threatened his life, only to be threatened herself--as Phelan Kell began strangling her on the spot. Morgan calmly called off Phelan to spare her life, while Phelan warned her that his Wolves would come for revenge should anything happen to him or his father. This latter part of the incident was a ploy to deceive Katherine in the hopes that she would slip up and reveal any incriminating evidence she was hiding.

After the outbreak of the FedCom Civil War, Morgan helped to plan some of the campaigns of the war, and took over as leader of the allied forces for Victor when his lover Omiko Kurita was murdered.

He was also a key leader in the retrieval of Peter Steiner-Davion from Zaniah III's St. Marinus House to lead the assault on Tharkad.

Following the end of the war, Kell was Archon Peter's first choice for the post of General of the Armies. He declined the post, due to his mercenary status and an unwillingness to shoulder the weight of rebuilding the shattered LAAF. Peter instead placed Morgan in command of the newly renamed Arc-Royal Theater,[17] but like Caesar Steiner's posting as General of the Armies, the position would be a temporary one and he had been replaced by General Thanom Hammerskjold in the reshuffling of the Lyran army that preceded the 3067 Whitting Conference.[18]

Morgan survived the Jihad and died in his sleep in 3083; with his death, both his title and command of the Kell Hounds passed to his daughter, Caitlin Kell, who began the process of rebuilding the mercenary command from the dozen or so survivors of Operation SCOUR.[19] One of the more unfortunate legacies of Morgan's life was the difficult position Clan Wolf-in-Exile found itself in after the Jihad; Morgan's long life left the exiled Clan as the occupants of restricted enclaves, rather than a true part of the population of the Kell fiefdom, something that might have been avoided if Morgan's son Phelan had been able to inherit Morgan's title.[20]

Despite the many momentous political events of Kell's storied life, he was also recognized as a truly legendary MechWarrior.

He was married to Salome Ward who bore him a son, Phelan Kell, as well as a daughter, Caitlin Kell. He also had an illegitimate daughter, Megan Kell, who ended up marrying Dan Allard. He helped raise his nephew Christian Kell, whom he met in 3042 at age 16.[citation needed]

Kell was noted as being an elite pilot of the Archer BattleMech,[21] and he continued to pilot his distinctive red-and-black-painted machine until his "final" retirement from active military service in 3055. He was reputed to be "unkillable" on the field of battle, and his proficiency with the Archer led him to be considered as one of the greatest MechWarriors of his age, second only to Natasha Kerensky.[22]

The letter was Katrina's second act as Archon after gaining power.[25]