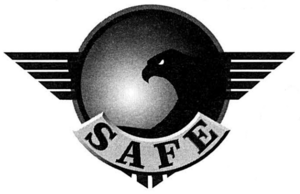 Often considered the least effective of the Great House intelligence service of the Inner Sphere, SAFE was the intelligence agency of the Free Worlds League. This reputation was gained in part due to several high-profile failures and internal divisions within the organization. Nevertheless, SAFE did manage to carry out several successful operations against its neighbors, the Lyran Commonwealth and the Capellan Confederation, and the organization was particularly adept at political and economic intelligence-gathering and analysis.[1]

Though the formation of the Free Worlds League resulted in the combination of strategic resources under a single authority, fear the League would not prove to be long lived meant its member states heavily resisted disbanding their individual intelligence agencies in favor of single central government agency. The limitations and logistical problems of having six different intelligence agencies came to a head during Captain-General Juliano Marik's war against the Stewart Confederacy, the Marik helping to narrowly push through a bill in August 2317 to create a single unified Free Worlds League intelligence bureau, overseen by the Minister of Intelligence in peacetime and by the Captain-General during a crisis.[2]

From its formation, the NIA conducted both internal and external operations, attracting a reputation during the first few centuries of its existence for fastidious research, detective work and analysis more so than brutality or the romanticized image of a debonair spy. By the post-Reunification War era however, the NIA had developed into an extremely closely knit organization that considered itself a society onto itself, using its abilities to hide and cover up its excesses. The NIA's abuses finally came to light with the release of NIA Unmasked by former NIA Director of Intelligence Shannon Cantrell, revealing for example that NIA Accounting Division prepared two sets of internal costings from 2588 to 2631, one for internal use and one for the Parliament's NIA Oversight Committee, with even the organization itself unaware of every operation its various cells enacted. The scandal arising from these extralegal activities led Parliament to revoke the organization's centuries-old charter in 2631.[2]

Formation of SAFE and the Scourge of Death[edit]

The SAFE acronym had been described as "an obscure phrase in a forgotten language, the meaning of which has been lost."

In 3081, with the dissolution the Free Worlds League, several successor states appeared, each maintaining its own version of SAFE.[citation needed]

The head of the intelligence agency was the Director of SAFE, who answered to the Captain-General and the Parliamentary Intelligence Oversight Committee. In turn each of the three major branches of SAFE was headed by an Assistant Director, and each branch was further subdivided into regional offices which oversaw affairs either within one of the other Great Houses or within major regions of the League. Although each branch had its own separate reporting structure, for practical purposes most SAFE field offices included elements of all three and appointed one person to oversee all activities within that region.[3][4]

The Analysis Branch was the largest of the three branches, with its main headquarters on Atreus. It oversaw all foreign and domestic intelligence-gathering operations and had offices spread across the entire League. The Analysis Branch worked closely with its FWLM counterpart, the Military Intelligence Directorate, and in later years with the Word of Blake ROM.[3][4] The branch was divided into two major subdepartments.

The largest and most pervasive of SAFE's subdepartments, Information Gathering (IG) had agents on every League world and on many foreign worlds. For the most parts these agents were passive, part-time information collectors who maintained a second occupation while monitoring local news or the latest cultural developments. Shell companies were created so that some individuals weren't even aware they were working for SAFE. There existed a smaller core of dedicated intelligence operatives charged with the active infiltration and subversion of enemy organizations, but the majority of these tasks were given over to the Covert Operations branch. The myth that IG agents were poor team-players grew from the fact that many worked alone.[4][5]

The second of the Analysis Branch subdepartments, Active Analysis was responsible for investigating the reported data submitted by IG and, on occasion, directing their further efforts. The main office on Atreus was responsible for analyzing overall trends while regional offices on important worlds such as Andurien, Tamarind, Stewart and Oriente focused on particular issues such as events within a given region or economic developments. Working in small teams, AA agents were methodical and highly competent. Indeed Active Analysis was the best at their job compared to any similar department within the Inner Sphere's other intelligence agencies, even ComStar's ROM. Their only shortcomings were the fact they had to rely on SAFE's other branches to gather intelligence for them and that they were dependent on the willingness of the League's leaders to listen to them.[4][5]

Covert Operations was tasked with a wide range of covert actions within and without the League, from infiltration to assassination, often working in concert with the IG subdepartment and the military's own special operations units. The range of activities undertaken by Covert Ops also included sponsoring terrorist organizations within the other Great Houses' territories, a policy which continued long after the Clan Invasion when it was "officially" discontinued. Covert Ops agents tended to work in small teams by themselves, but there were also two larger units with the department.[4][5]

The Eagle Corps was SAFE's special forces team, on par in skill and equipment with the Federated Suns' MI6 and the Draconis Combine's DEST. Numbering three companies of elite commandos drawn from the best of the FWLM and law enforcement agencies, the unit officially never existed but became something of an open secret after a string of successes in the years after the Clan Invasion. Their headquarters, the Eyrie, was built on Atreus' moon and guarded by a special detachment of Xenoplanetary Infantry. This heavily-fortified sanctuary could also function as a command center in the event the Atreus system was invaded.[4][5]

Dark Shadows was an independent BattleMech battalion operated by SAFE for missions requiring additional firepower. Its members were the elite of the FWLM who were seconded to the unit, usually between 18 to 24 months at a time. Like the Eagle Corps the unit officially didn't exist, but leaked information helped to color the Dark Shadows' public perception with myth and misdirection, and helped inspire a series of television programs allegedly based on their operations.[4][5]

Charged with defending against both foreign and domestic threats, the Counterintelligence (CI) branch was the most secretive of the three SAFE divisions. What was known about CI gave the public the impression its primary task was rooting out foreign agents and saboteurs, particularly from the Lyran and Capellan realms. A few Counterintelligence agents were even public about their role as "mole hunters," hoping to cultivate a deterrent effect, although most maintained a double life to hide their activities. While hunting down foreign agents was one of their missions, Counterintelligence's main focus were domestic threats to the League's security from its own citizens. For the longest time this focus fell particularly on the problematic governments of Andurien and Regulus, known hotbeds of agitation and rebellion. In the years after the Clan Invasion however CI shifted to investigating members House Marik itself who were seen as opposing Captain-General Thomas Marik.[4][5]

In the first printing of Hour of the Wolf, SAFE was described as an acronym for "Search and Find Everything."[6] This was removed from subsequent revisions for not meeting the criteria as "an obscure phrase in a forgotten language."

They are known to recruit from Our Lady Maria Auxiliadora Preparatory School[7].