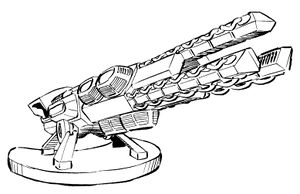 The Naval Gauss Rifle (or N-Gauss), like its ground based cousins, uses a series of magnets to propel a ferrous projectile at an enemy WarShip, DropShip, or JumpShip. Like the smaller units mounted on 'Mechs, Naval Gauss Rifles offer good damage at long range with low heat. The biggest drawback to these WarShip mounted weapons, like their autocannon based counterparts, is that they're not effective at targeting anything smaller than 500 tons due to the sheer size of the weapon and its shells. They're simply too large to track AeroSpace Fighters and other small threats effectively.[1]

The other major drawback to members of the Naval Gauss Rifle family is their cost: The lightest Naval Gauss cannon costs over twenty million C-Bills,[2] an amount greater than some planetary economies.

One key advantage to the Naval Gauss Rifle is its safety compared to its smaller cousins. Heavy, Light and regular Gauss Rifles have a habit of exploding if they're damaged by weapons fire, leading to serious damage in the unit carrying them. Due to the sheer size of a WarShip and its weapons, the Naval Gauss Rifles do not have this problem. They're so large that the engineers who designed them were able to add blast redirectors and baffles that directed the force of an exploding capacitor system out the muzzle and other related channels. (Essentially each Naval Gauss Rifle has integrated a CASE system into itself.)

As of 3070, Clan Hell's Horses has not yet created WarShip sized versions of their Hyper-Assault Gauss Rifle. Like other WarShip weapons, the Naval Gauss Rifle comes in three sizes: