Nondi Steiner was the younger sister of Archon Katrina Steiner. Lacking her sister's interest in politics, Nondi largely stayed out of the discord between Katrina and Alessandro in 3005. 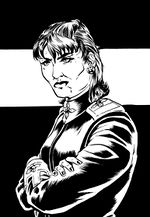 Nondi Steiner was the second child of Lisa Steiner and Alexandr Weldon, she spent much of her life competing with her older sister Katrina Steiner. She embarked on a military career like her elder sister and, during the Fourth Succession War, became a General in the LCAF and Margrave of Tamar Theater. Nondi was infuriated by her sister's seizure of the Archonship in 3007 but remained loyal to her despite their sibling rivalry.[4] She was a firm Lyran supremacist, highly skeptical of Katrina's peace proposals of the 3020s and hostile to the alliance with the Federated Suns. The Duchess of Gallery at the time, she considered retirement as early as 3025, the burden of command weighing heavily on her. As a General, she was known to occasionally physically abuse officers under her command for incompetence.[4][5]

During the Fourth Succession War she was the commanding officer of Operation GÖTTERDÄMMERUNG, the LCAF's assault into the Draconis Combine.[6]

She served as a military advisor to Hanse Davion during the War of 3039, Katrina's daughter and successor as Archon Melissa Steiner having delegated many military decision making responsibilities to her in spite of Nondi's requests to retire.[7]

She remained distant from the political machinations of the Federated Commonwealth, but became enamored of her niece Katherine Steiner-Davion's "Steiner First" attitude. She became General of the Armies following Katherine's secession of the Lyran half of the Federated Commonwealth and ultimately served as Regent when Katherine was on New Avalon, but remained blind to her great-niece's megalomaniacal actions, supporting her to the very end.[4]

Put in charge of the LCAF's preparations for the War of 3039 she served directly under the General of the Armies after having her requests to retire denied by both the High Command and the Archon. She planned both the Commonwealth and Dieron thrusts, taking personal command of the drive to Vega during Operation WINTERSCHNEE and placing her friend Field Marshal Vanessa Bisla in charge of the Dieron Thrust. After establishing her command post on Vega and sending her accompanying 3rd Lyran Guards and Camacho's Caballeros to prepare for the next wave, DEST strike teams caught her in a Head Hunting attack that incapacitated her and forced her evacuation. This proved disastrous insofar as command fell to Nondi's subordinate Kathleen Heany as the highest-ranking officer remaining during Nondi's long recovery, allowed her subordinate commander's preference for older Lyran tactics to undermine the Commonwealth Thrust.[4]

Federated Commonwealth and the Clan Invasion[edit]

The failures of 3039 left Nondi with severe insecurity, despite her promotion to head of the AFFC's Lyran State Command. She once again considered retiring in the late 3040's but the Clan Invasion forced Nondi to remain. The losses to the former Lyran Commonwealth at the hands of the Clans left Nondi extremely bitter towards the "Davion Military", feeling that the AFFC should have done more to assist and defend the Lyran territories.[4]

When Katherine Steiner-Davion sundered the Federated Commonwealth in 3057, Nondi Steiner supported her and served as General of the Armies of the breakaway Lyran Alliance also serving as Regent for Katherine for short periods.[4] In the 3060's she authorized the development program that eventually introduced compact engines.[8]

Nondi was serving as Katherine's Regent on Tharkad when Victor Steiner-Davion declared his rebellion against Katherine's rule, and she was largely responsible for putting the Lyran Alliance on a military footing in response. She was killed on April 2nd, 3067, at the age of 86, in single combat against her great-nephew, Peter Steiner-Davion, in Tharkad City.[9]

For much of her career, Nondi piloted a Zeus BattleMech. During the battle of Tharkad City at the end of the civil war, she used a Hauptmann OmniMech.[10]