Phillip Drummond (born May 20th 2746[2] – died 2858) was the first Khan of Clan Nova Cat, founder of the Drummond Bloodline, and father of Sandra Rosse.

While early accounts of his life are unclear, it is known that Phillip Drummond was originally a Major of the Rim Worlds Republic, serving as an officer in the 832nd Amaris Dragoons. Stationed on Apollo when Stefan Amaris murdered First Lord Richard Cameron, Drummond was among the Rim Worlds Army officers who expected Aleksandr Kerensky's forces to begin their assault upon the Republic in August 2767, or for raiders to appear in late June at the earliest. Instead, around 0300 on June 3rd, Drummond awoke to learn that two squadrons of SLDF vessels had mounted a surprise attack that destroyed Amaris' Palace and the military sector of the spaceport before establishing a blockade that effectively paralyzed the regency of Mohammed Selim.[3]

While he had originally taken great pride in serving the Rim Worlds Republic, Amaris' treachery and abandonment of his nation shattered the officer's loyalty to his government, which he quickly transferred to General Aleksandr Kerensky, a man he still respected. In an effort to prove his new dedication to General Kerensky, and to show his resourcefulness and dedication, Drummond penetrated the defenses of the SLDF headquarters when they landed on Apollo. Surrendering to Kerensky's security detachment in person, Drummond offered his services and an oath of loyalty to Kerensky. Kerensky accepted, recognizing Drummond as a kindred spirit, and Phillip Drummond was commissioned into the SLDF as a Lieutenant.

Drummond proved to be an excellent source of intelligence on Rim World Republic troop movements and tactics, earning the respect of his initially suspicious fellow officers in Intelligence Command. Phillip Drummond was decorated by Kerensky for his efforts, and was often used an example to inspire Kerensky's troops during his speeches.[4] [1] 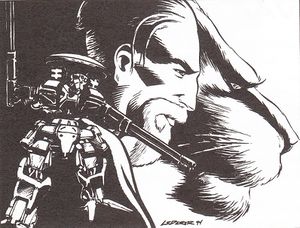 When Aleksandr Kerensky made his decision to leave the Inner Sphere, Phillip Drummond was one of those who followed him into self-imposed exile. Believing that he owed his life to Kerensky, and that Kerensky was the only man worthy of his loyalty, Drummond left the Inner Sphere with nothing but the equipment assigned to him as a member of the SLDF.[4]

When the Pentagon Worlds were settled, Phillip Drummond was one of those who tested out during the general demobilization of the SLDF. Beginning a new career as a scientist, Drummond was part of the team tasked with developing Streak SRM technology.[5]

While visiting friends on Circe, Phillip Drummond met Anna Rosse. Although the traumatized woman at first resisted his attempts at friendship, she eventually warmed to his efforts and their friendship eventually developed into love. While they never officially married, Phillip settled with her on Circe where the couple had three children, two sons and a daughter, Sandra.[5]

When the Pentagon Civil War erupted, Anna and Phillip took their children and fled with others into the wilds of Circe. But the violence followed them and an attack on their primarily Free Worlds-settled community by Lyran assailants resulted in the death of their sons, leaving only young Sandra alive. The vengeful couple chose to join the military forces loyal to the planetary government, but the moral degradation and brutality of both sides left them disillusioned. When Nicholas Kerensky called for the Second Exodus to Strana Mechty, Phillip and Anna eagerly joined him.[6]

The wise Nicholas spoke to them all
Through the haze of their anguish
His passion flowed through the doubt,
His conviction tore at the fear
He was become the living legend.
Phillip listened and believed;
He would follow this great man
as he had followed the father
into Exodus, and hope.

Phillip Drummond, his warrior skills revived by the fighting on Circe, easily tested into a command position in the newly established Clan Nova Cat, and he was elected by his fellow Nova Cats as their first Khan. The Nova Cat Remembrance hints that Nicholas Kerensky influenced this choice, as a means to reward Phillip for his loyalty to Nicholas' father and also as a way to demonstrate his desire to erase previous social divisions. Phillip also continued to secretly maintain his relationship with Anna, despite Kerensky's emerging laws against intercaste relationships.[7]

When the liberation of the Pentagon Worlds was being planned, Clan Nova Cat was assigned to Circe. As a former resident of that world, Drummond was well suited to lead his Clan there and his first-hand knowledge proved a key factor in the Nova Cats' success. It also enabled him to serve as Kerensky's unofficial deputy among the Khans campaigning on the planet.[8]

Clan Nova Cat paired up with Clan Mongoose for the southern theater of operations throughout 2821, first crushing the Emerald Kingdom in July before splitting up to target new enemies. Drummond found himself returning to his former home that August: the territory he had once lived in was now part of the Gant Republic and he and Anna had been witnesses to the early career of the Republic's president-for-life, Silas Gant. Drummond's memory of the local geography, while dulled after two decades, was still lucid enough that his warriors were able to mount hit-and-run strikes against unsuspecting Gant soldiers, demoralizing them. By mid-September the Gant Republic was collapsing into internal warfare after Gant himself was lynched, and Drummond was faced with the disagreeable task of restoring order to the region and preventing local feuds from sparking more violence.[9]

The final enemy Drummond and his Nova Cats faced on Circe was the honorable Brotherhood of Fianna, who first attempted to reach a settlement with the Clans whereby they would serve Kerensky in the same capacity as they had before: as the armed protectors of their local communities. Unfortunately a recent failed attempt by the Snow Ravens and Wolverines to work out a similar accommodation with the Kerensky Dominion ensured that Drummond and Khan Loris of the Mongoose refused. What followed was a series of hard-fought but honorable clashes before the Brotherhood finally capitulated on 9 December.[10]

After the Pentagon campaign, Phillip Drummond learned he had developed a degenerative nerve disease. While he had resigned himself to an ignominious end, he learned from Anna Rosse that Sandra had tested as a Star Captain in Clan Nova Cat, prompting Drummond to reveal his condition to his daughter. Sandra developed a plan and decided to replace her father as Khan. After winning her Rosse Bloodname, Sandra challenged Phillip to a Trial of Grievance, calling for him to voluntarily step down as Khan. Phillip accepted and walked away from the position, leaving Sandra Rosse as his successor.[11]

While his daughter served as Khan, Drummond secretly underwent treatment at a small medical facility on Circe with Anna's help, eventually curing his disease. After Sandra's death in 2823, Phillip felt he was the only one able to continue Sandra's vision for the Nova Cats. Undergoing a series of Trials of Position, Phillip Drummond regained his status as a warrior. He then spoke before the Council of the Nova Cats, his speech before the council proving persuasive, and he was again confirmed as Khan of the Nova Cats, the vote being virtually unanimous. Phillip Drummond continued to serve as Khan of the Nova Cats until his death at the age of 112, leading his Clan well into the Golden Century.[12]

While Drummond was awarded by Aleksandr Kerensky during Phillip's time with the SLDF, it it not mentioned what the award was.