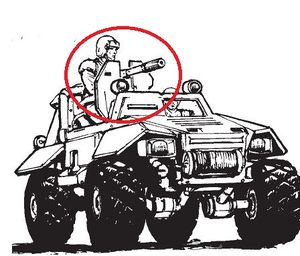 Pintle Mount is a powered yet unarmored turret that can be mounted on a combat, ground, or even air type support vehicle. This mount is intended to allow infantryman to use heavy man-portable weapons up to a half ton in weight. The mount has a limited arc of 180 degrees depending on the vehicle's direction. Due to the limited firing arc, this is rarely seen mounted on Combat Vehicles. The Pintle Mount has existed since the Pre-spaceflight Era.[1]