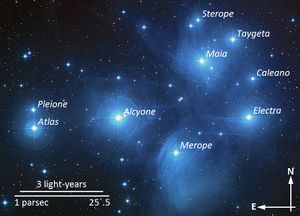 The Pleiades are a star cluster that is 389.31 light years rimward of Terra in the Federated Suns' Capellan March. It contains 100 inhabitated systems, among them Maia, Electra and Merope.[citation needed]

The Pleiades (or Seven Sisters) contains over 1,000 members and are dominated by hot blue and extremely luminous B-type stars. A dust cloud in the interstellar medium that the stars are currently passing through forms a faint reflection nebulosity around the brightest stars (hence the alternate name Maia Nebula after the star Maia). The cluster core radius is about 8 light years and tidal radius is about 43 light years.

The nine brightest stars of the Pleiades are named for the Seven Sisters of Greek mythology: Sterope, Merope, Electra, Maia, Taygete, Celaeno, and Alcyone, along with their parents Atlas and Pleione.

One hundred of the Pleiades systems are inhabited.[41] But the worlds of Maia, Electra and Merope are the most important and probably have the largest population.[42]

Visible with the naked eye at the Terran night sky the major systems of the Pleiades were already discovered and named early during the Pre-Spaceflight Era. After its founding the colonies of the star cluster joined the Taurian Concordat but were attacked in 2580 by the SLDF during the Reunification War and subsequently annexed by the Federated Suns.

The Pleiades Cluster had three major habitable worlds in 2580, and each was heavily industrialized and well populated.[43] The SLDF deployed their IV Corps supported by elements of I Corps to take these three worlds. The fighting lasted until November, 2580. The defending Taurian units were destroyed, but the attacking SLDF divisions were reduced to below forty percent of their strength.[44]

In the January of 3067 the Concordat tried to exploit the weakness of the Federated Suns in the wake of the FedCom Civil War and sent troops to reconquer systems lost 500 years ago. The Taurian force, among them the Pleiades Hussars and the Pleiades Lancers trying to recapture their ancient homeworlds, initially made remarkable progress and reached the cluster in March. Then came the Davion counterassault that caused great damage among the Taurian forces, only the troops in the cluster could stand their ground. The tide turned again with the outbreak of the Jihad when the Davion leadership was thrown into chaos due to the occupation of New Avalon. At the end of the Jihad the Pleiades were under unchallenged control of the TDF.

The flag of the Pleiades is an eagle backed by a triangular field.[50]