This list shows all Republic of the Sphere Prefecture V planets up to 3130. 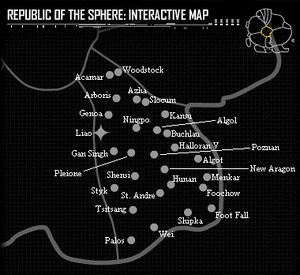 The prefecture's capital planet was Liao.[1]

The is a Prefecture of contrast, representing the polarization of the finest and worst of the Republic. Most of the worlds were for centuries under Capellan Confederation, but were captured during the Fourth Succession War and were part of the Federated Commonwealth until the Jihad. Entranced by new cultures offered by their brief stint under FedCom rule, most of them gladly defected to follow Devlin Stone and his new vision.

As House Liao never recognized the Republic's claim to those worlds, many of those worlds have seen raids, brush fire conflicts, and uprisings.[2]

After a number of bombings and assassinations throughout the Prefecture by the Daughters of Kali, the RAF took action and the group was destroyed by the Triarii Protectors in March 3133 though their leader, enigmatic woman known only as "Maa Durga" escaped.[3]