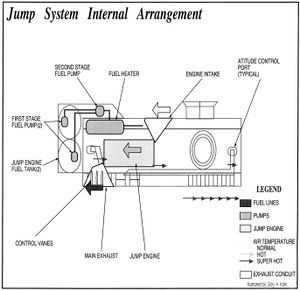 Developed by Dr. Soren Iishi of the Terran Hegemony in 2464 [1], thirty years after the introduction of the first BattleMech, the Mackie, and first appearing on the Wasp, Jump jets allow 'Mechs to navigate difficult terrain by rocketing over obstacles. Since their invention, jump jets have been adapted for use on other units. They entered full production in the Hegemony in 2471, becoming commonplace in 2500.[1]

Jump jets work in a similar, albeit more limited, fashion to the fusion rockets installed on aerospace fighters. Inside a magnetically shielded reaction chamber buried deep inside the 'Mech, an electron beam superheats a reaction mass and expels the expanding gases through nozzles located on the back of the 'Mech or in its legs. Reaction mass is commonly provided in the form of air forced into the reaction chamber by a system of turbo-compressors, but most 'Mechs have a small amount of alternate reaction mass, usually in the form of hydrogen, water or mercury, in order to facilitate operation in a vacuum and to reduce the wear on the jets from superheated oxygen when in an atmosphere that contains it[2]. The reaction mass provided by an atmosphere is effectively infinite, but the onboard supplementary reaction mass carried is limited by the number of thruster assemblies installed unless additional tankage is added to the 'Mech[3].

Because of the heat produced by jump jet activation and limited onboard fuel, jump jets can only maintain thrust for a few seconds. A far cry from flight, jump jets nevertheless allow a 'Mech to make short leaps sufficient enough to outmaneuver 'Mechs not similarly equipped or bypass obstacles and unfavorable terrain[2][4]. Care must be taken when jumping, however, as jumping causes heat buildup with even the shortest jump generating more heat than running, and damage to a 'Mech's gyro or leg actuators and joints can cause a 'Mech to fumble upon landing. Owing to the inability of liquids to be compressed, submerged jump jets cannot be used lest the extreme pressure rupture the jet's casing[2][5].

Jumping makes a 'Mech harder to hit, but the accuracy of weapons fitted to the jumping 'Mech is also adversely affected[5]. In addition to standard weapons fire, a 'Mech with jump jets can perform a combat maneuver known as Death from Above, which involves it jumping into the air and attempting to land on an opponent. A successful DFA has the potential to crush an opposing 'Mech's head, but the maneuver risks damage to one's own 'Mech even if the attack is successful[6]. Another attack that has been known to be performed using jump jets nicknamed the "I Am Jade Falcon" maneuver uses the jets in a 'Mech's legs to torch an adjacent hostile[7].

A 'Mech may have one or more jump jets installed; each thruster increases the 'Mech's maximum jump distance by 30 meters[5] but takes up space and weight on the 'Mech's frame. The mass of the jump jets is proportionate to the mass of the 'Mech they are installed on, owing to the increased power needed to move a more massive object and the maximum number of jump jets that a 'Mech can carry, and thus its maximum jump distance, is limited by the motive power provided by the 'Mech's engine[8]. Improved Jump Jets are also available, which take up twice the mass and space of standard jump jets, but produce less heat and allow for more nozzles to be fitted for a given engine allowing for a longer maximum jump distance[4][8]. Due to the power requirements, jump jets cannot function on a unit that lacks a nuclear engine, be it fusion or fission based[4], and a single chassis cannot mount both types of jump jets simultaneously. Jump jets can be pod mounted to grant an OmniMech the ability to jump and are found in numerous variants. Like all fixed equipment, any jump jets hard-mounted to an OmniMech's base configuration cannot be removed, though they can be supplemented by pod mounted jump jets[8].

Introduced by the Western Alliance on Terra in 2050, Jump packs use simpler, chemical based rockets to propel infantrymen nearly 100 meters through the air[9][10]. Later, these jump packs were adapted for use on battle armor allowing suits up to one ton to rocket up to 90 meters in one bound, while suits up to 2 tons are limited to 60 meter jumps. A jump booster can be added to a jump-capable suit to supercharge the jets and add 30 meters to the suit's maximum jump range[10][11].

Adapting jump jets to vehicles is more complex than simply attaching thrusters to the bottom of a tank. Though the jump jets themselves are functionally similar to the standard jump jets fitted to 'Mechs, successful operation of vehicular jump jets hinges on an advanced AI computer and guidance system first seen on the SLDF's Kanga Jump Tank in 2650 that is able to precisely track the vehicle's trajectory and vector the thrust of the jump jets to stabilize the vehicle. Because of the prohibitive complexity and expense of the system, few jump-capable vehicles were produced beyond the Kanga, and even the vehicle heavy forces of Clan Hell's Horses who retained but have sidelined the technology.[12][13]