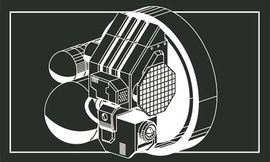 During its campaign to reunite the Periphery with the Inner Sphere, the Terran Hegemony-led Star League attempted several technological improvements to Age of War-era weapons systems.[1][2] Artemis IV Fire-Control System was developed as an alternate improvement to missile guidance to using the Narc Missile Beacon. The prototype Artemis IV FCS (Artemis-P) used a combination of the unit's sensor array with laser guidance and tight-beam microwave transmitters to narrow the spread of directly fired LRMs and SRMs, thus increasing the number of missiles that hit per salvo, but does not improve the chances the entire salvo hits its target. Artemis-P cannot be used to improve the accuracy of indirect LRM fire, and can only improves the accuracy of Artemis-compatible LRMs and SRMs, which are twice as expensive as standard versions. Artemis-P has no benefit for unguided rockets. Artemis-P became available in 2592, but was subsequently improved and replaced by Artemis IV FCS in 2598. The compatibility of Artemis-P and standard Artemis IV FCS allowed for easy upgrades as the new equipment became available.[3][4][5][6][7]

The Artemis-P must be mounted in the same location as the launcher it controls, taking up space and weight on a BattleMech like other components. If any standard missile launcher is equipped with an Artemis system, every launcher of that type must have its own Artemis-P attached. For example, a 'Mech mounting an LRM-15 and an LRM-5 would need two Artemis-P systems. Rocket Launchers, MRMs, Streak launchers, and NARC systems are incompatible with Artemis-P. ATM launchers have their own intrinsic Artemis-guidance system.[4][5][3][6][7]

Artemis-P adds a +1 to the cluster hit roll after an Artemis-P-guided LRM or SRM salvo hits a target.[6][7]

If standard Artemis IV FCS is available, units equipped with undamaged Artemis-P modules may replace them with Artemis IV modules for a simple repair roll with +1 modifier.