This article is about the 3055 pirate band and its leader. For the identity of Katrina Steiner during her adventure in the Periphery, see Red Corsair (3004). 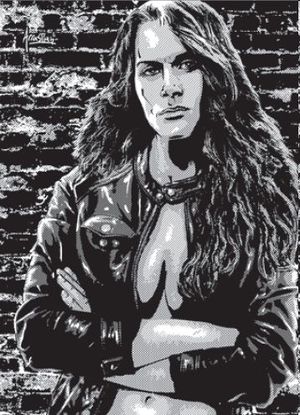 Red Corsair refers both to a woman whose name was later revealed to be Nekane Hazen, and her pirate band acting on behalf of the Clans.

Very little is definitively known about this group, with much of what is concluded about them due to circumstantial evidence. What is known is that between 3054 and 3055, a large force of pirates equipped with Clan technology began raiding planets along the Federated Commonwealth's border with the Clan Occupation Zone. It was strongly suspected by both the Federated Commonwealth's Victor Ian Steiner-Davion and Khan Phelan Ward of Clan Wolf that the group was being used by the Crusader movement to try and destabilize the Truce of Tukayyid, and perhaps restart the Clan Invasion. (Support for this theory was found when the 31st Wolf Solahma, under the leadership of Conal Ward, joined forces with the Red Corsair on Elissa.)[1]

During a series of engagements with Phelan's Wolves and the Kell Hounds, the pirates were eventually hunted down and eliminated, though not before Conal Ward of the Wolves was implicated in their activities. Their leader, a woman who only ever called herself the Red Corsair, was killed by her former prisoner, Nelson Geist.[2]

During the Refusal War, the Jade Falcon Khans Elias Crichell and Vandervahn Chistu briefly discussed the Red Corsair in familiar terms, naming one Nekane Hazen as the leader of this secret operation. This lends further credit that the pirates' origins were with the Jade Falcons, since the name "Hazen" is a familiar one among the Jade Falcon bloodnames.[3] Genetic examination of the Red Corsair's remains confirmed that she was in fact Nekane Hazen.[4] Once, she told Nelson that she may have been the one that mutilated him. If this is true, it may indicate she served in the Gyrfalcon Galaxy in the first stages of Clan Invasion.[5]

BattleMechs and other equipment[edit]

The Red Corsairs seemed to use Inner Sphere BattleMech designs refitted with Clan technology. Furthermore, it seems that the entire unit was using energy-based weapons exclusively. This gave them a significant logistical advantage during their campaign, as they had no need to replenish ammunition, and usually simply seized food and other mundane supplies from their targets. The unit's aerospace fighters seemed to be Star League-era designs, possibly also refitted with Clan weapons.

The Red Corsair herself piloted a BattleMaster that included a Double Cockpit, two ER PPCs and a Large Pulse Laser. It also retained the four forward-facing medium lasers, naturally also using Clan versions of those weapons. An uncertain number of double heat sinks were remarkably successful in reducing the machine's heat buildup.

For transport, the Red Corsair's fleet of DropShips and JumpShips included a Congress-class WarShip later identified as the Fire Rose.[6] During the Red Corsair's assault on Arc-Royal the Fire Rose was replaced by a Black Lion-class battlecruiser.[7] This was strong evidence that the pirates were backed by the Clans.

The Red Corsair's troops fought like Clan warriors, engaging and destroying the garrison units they faced before moving on to acts of piracy. To keep their clan safe of reprisals, all of the fake pirates refused to surrender and committed suicide when their 'Mechs were disabled.[8]