In her youth, Samantha had shown a lack of discipline, anger problems, and strong anti-male feelings due to her earlier life. She had a muscular body as was known for her short hair and brown eyes. Later, she overcame her views and emotions and subsequently was able to temper them. Clees was always known to have a habit of pacing.[2][3][4] 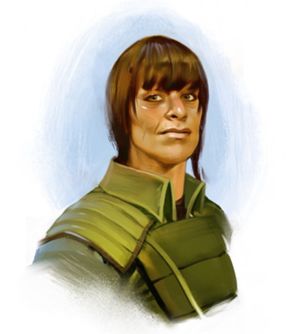 Samantha in her youth was fiery and suffered the misconception that she was a subject of sexual discrimination, due to her lack of promotions and not being honored for accomplishments. As her military career continued, she became abusive towards her male superiors, whom she felt were holding her back. She eventually earned chance at earning a Bloodname, but she was defeated by a female MechWarrior. After the fight, her victorious opponent spoke to her and revealed that her lack of discipline was the true reason for her lack of accomplishment in her career.

After that, she had begun to rise within the ranks finally after taking the advice to heart. Only when she reached higher ranks did she finally begin to experience discrimination. She faced off with one discriminatory officer in battle, dishonoring him and earning his Bloodname in the process.[5]

In her rise prior to her 30th birthday, she would take command Delta Galaxy. By this time she would be recognized as one of the finest military commanders in Clan Jade Falcon.[6][7]

Her Galaxy was part of the first wave of Operation REVIVAL, taking numerous worlds including Winfield, Black Earth, Hot Springs, Romulus, and Seiduts.[8]

On Antares, Samantha led her Galaxy in the delicate task of recovering a Star League-era supply base, which became hotly contested in Trials of Possession among other Clans whom were to share its supplies.[9]

In late 3051, her Galaxy would engage in Trials of Possession with Clan Steel Viper for worlds that the Falcons had already won. Many of these battles would be the fiercest known during the invasion.[10]

On Tukayyid in 3052, her Galaxy was committed to defense of Robyn's Crossing and Plough Bridge against ComStar's 214th and 388th Divisions. However, her and other Galaxy lost their supply depots constant attacks, were force withdraw from the planet.[11]

During the Refusal War, as Galaxy Commander of Delta Galaxy, she would see her unit rendered non-operational after the brutality of the conflict.[12]

After the events of the Refusal War, Marthe Pryde became Khan. She selected Samantha to serve as her saKhan. Despite her elevation, Samantha chose not to relinquish command of Delta Galaxy.[13] She would assist her Khan in re-organizing the Clan's ravaged Touman. In 3058, her Khan would dispatch task force into the Lyran Alliance to world of Coventry.

In 3076, Marthe Pryde was killed in an accident on Sudeten.[14] Samantha quickly took command of the Clan, facing challenges to keeping her Clan firmly under control. Among the first of her actions she took as Khan, she issued a standing order that any Trial of Position for position of Star Colonel or Galaxy Commander must be approved by her first. This was due in part of great number depletion of standing commanding officers during the course of the Jihad. She would then tap her former Executive officer of Delta Galaxy, Uvin Buhallin, as her saKhan despite protest of her officers.

Samantha continued the policies of her predecessor, while still maintaining her Crusader political stance.[15]

She would finally step down as Galaxy Commander of Delta, giving command to her saKhan, who had been informally commanding the unit for a decade. Samantha then took command of the rebuilt Turkina Keshik. She prioritized the Turkina Keshik, Epsilon, and Delta Galaxies for new equipment over other frontline and secondary units that otherwise would need it due to their deployment to the frontlines. Among other efforts to rebuild, Samantha allowed occupied worlds not known for rebellion to form vehicle/infantry level militias in efforts to bolster her Clan's worlds.[16]