Sandra Rosse (born 2??? - died 2823)[1] was the second Khan of Clan Nova Cat and was the founder of Nova Cat Mysticism in the Clan. She was the daughter of Phillip Drummond and Anna Rosse. 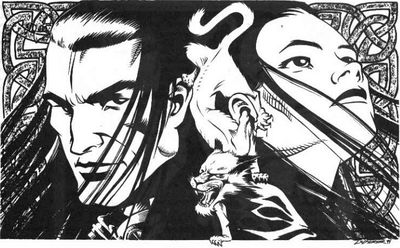 The daughter of Phillip Drummond and Anna Rosse, Sandra was born on the Pentagon World of Circe, prior to the Pentagon Civil War. A victim of the uprising, Sandra's two brothers were killed when her family's settlement was attacked by a pro-Lyran faction. Her parents initially took part in the escalating violence, siding with Kerensky loyalists, but they eventually grew weary of it. When Nicholas Kerensky called for a Second Exodus, her parents escaped to Strana Mechty, taking Sandra with them.[2]

With the formation of the Clans, Sandra's life took a new direction. While her father would test into the Warrior Caste, and become the Khan of Clan Nova Cat, Sandra was raised by her mother, now in the Nova Cat Merchant Caste. Under Anna's guidance, Sandra was steeped in her mother's belief in ritual and visions. While Phillip does not seem to have been directly involved in Sandra's life at this point, Anna kept him up to date on Sandra's progress.[2]

Sandra's path with the Nova Cats took her into the Warrior Caste. Sandra inherited many gifts from her parents, including a brilliant tactical sense and a gift for strategy. Her natural aptitude was also impressive, and she emerged from her Trial of Position as a Mechwarrior in Clan Nova Cat, with the rank of Star Captain.[3]

It was then that her father confided in her that he had developed a degenerative disease that was sapping his skill and reflexes. Sandra had adopted Anna's beliefs, and retreated to her mother's home to meditate on the issue. After three days of fasting, a vision proclaimed itself to her; she would become Khan of the Nova Cats in Phillip's place.[3]

As part of her plan she would need to gain a Bloodname. Sandra competed for, and won, the Rosse Bloodname within several months. As the laws and regulations of the Clans' eugenics program were not yet set in stone, Sandra chose to compete for the bloodname Rosse, in honor of her mother. The Rosse Bloodheritage belonged to Jason Rosse,[4] a Bloodname for which she would be ineligible by modern Clan standards, but due to the temporary flexibility of law, she was accepted.[3][5]

Secure in her position, Sandra challenged Phillip to a Trial of Grievance, accusing him of being unfit to fulfill his duties as Khan. Bucking the rules of engagement, she requested her father step down from the position voluntarily. Phillip's response was to bow to his daughter, step out of the Circle of Equals, and walk away from the position.[6]

Accusing her of sentimentality, she was immediately challenged to several Trials of Position by several Bloodnamed Warriors of the Clan. She easily defeated her opponents, impressing the gathered Nova Cat Warriors with her skill and bravery. When her supporters nominated her to the position of Khan, the Clan accepted.[6]

Once more retreating to her private sanctuary, Khan Rosse meditated and fasted for five days, seeking a vision about the proper path for her Clan. The answer was to give her Clan a more spiritual way of life. While she had previously kept her reliance on visions secret, she decided to reveal her mystic nature to the Clan. Many warriors, both in Clan Nova Cat, and among the other Clans, questioned the wisdom in this path. Unable to find any evidence of UnClan-like behavior, they were forced to watch and see how events would unfold. Those predicting a loss of honor would be disappointed as Sandra's ways were tempered with pragmatism. Ritual would not interfere with daily duties and routines.[6]

Sandra Rosse's term as Khan would not be free of mistakes. Her short love affair with Smoke Jaguar saKhan Liam Ismiril would result in a long running feud between the two Clans. Her creation of the position of Oathmaster earned condemnation by Nicholas when it was found she has appointed a warrior rather then allow competition for the title. Still, her Clan emerged from her reign in a position of strength among the other Clans.[6]

While Rosse fought well, a lucky shot against her primary weapon system crippled her 'Mech. Rather then surrender, Sandra continued to fight and was killed in the Trial.[1]

Khan Rosse was instrumental in making the Nova Cats the clan they are today.

While not a religion per se, the Nova Cats follow a way of life that has many religious overtones. Widely known as Nova Cat mysticism, this system of beliefs was introduced by Khan Rosse. Through her book, Ways of Seeing, Khan Rosse described her and her mother's mystical experiences and gave guidance as to the importance of rituals and visions. A majority of the Nova Cat Clan follows this set of beliefs and rite, and it has been instrumental in many of the decisions that the Nova Cats have made in their history.[7]

Sandra Rosse also compiled a private journal filled with mysterious portents and her divinations regarding the future. Often proving to be eerily accurate, this document is of supreme importance to Clan Nova Cat Oathmasters. It would one day guide their decision to side with a reborn Star League against the rest of the Clans.[8]

Sandra Rosse created the position of Oathmaster within the Clans. While it has since become a more honorary position than one with any real duties among the other Clans, it maintains an important spiritual role inside Clan Nova Cat.[6]

One of Khan Sandra Rosse's first policies was to give the Merchant Caste free reign to operate for the benefit of the Clan. A policy influenced by her mother, Anna Rosse, and later cemented into place by Khan Rosse's father, Khan Phillip Drummond, this lead to Clan Nova Cat becoming a strong economic power among the Clans, cementing its place as one of the invading Clans during Operation Revival.[6]

The long running Nova Cat-Smoke Jaguar feud was the result of Khan Sandra Rosse's brief love affair with Clan Smoke Jaguar saKhan Liam Ismiril. While initially feeling an attraction which she could not clearly identify, Sandra would reach a point where she could not ignore the differences between their respective Clans' philosophies. She found her growing love for the saKhan disorientating and confusing. After one particularly nightmarish vision that Sandra interpreted as the Nova Cats being destroyed if they followed the path of the Jaguar, Sandra Rosse broke off their relationship. Within a week, saKhan Ismiril responded; the corpse of a Nova Cat was discovered in one of her Clan's iron wombs, an unmistakable declaration of enmity between the two cat Clans. The Nova Cats and Smoke Jaguars remained bitter enemies until the latter's demise at the hands of the reborn Star League.[9]